Reflections on the first hybrid UDance 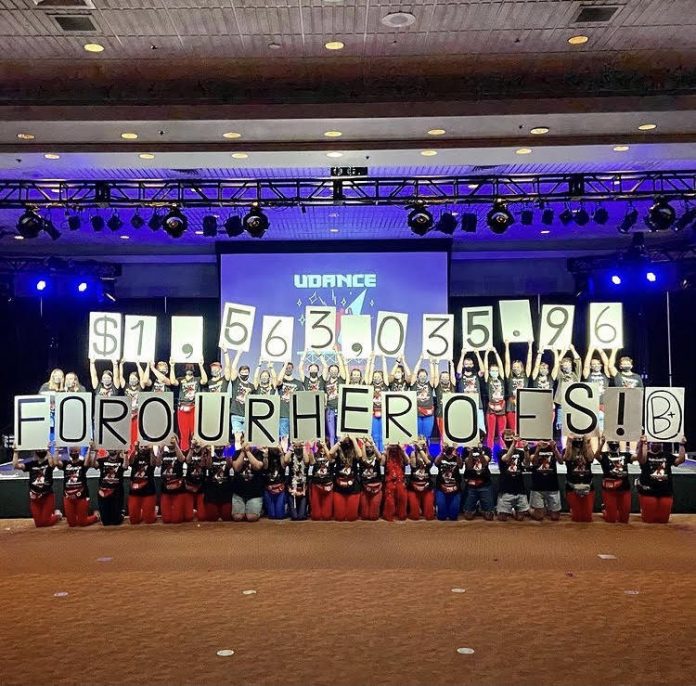 On Sunday, April 25, the university hosted the first ever hybrid UDance event, which took place at a variety of locations on campus as well as over Zoom.

The in-person event was split between the Trabant Student Center, Perkins Student Center and the Green, with additional pop-up stations along Main Street. There were also online activities that took place over Zoom, and all 12 hours of the in-person event were livestreamed. Although this UDance was very different from years past, Co-Executive Directors Sara Donnelly and Maria Lilley said that they were proud of the way things turned out.

“[It] was one of a kind in the sense that it’s never before happened, but it also felt similar to past UDances,” Lilley said. “We’ve had 15 years of UDance, and we haven’t had it in the Trabant MPR since that first year, but something about the people there and the energy, it felt almost the exact same as the feeling that you’d have in the Bob Carpenter Center.”

Donnelly said that hosting part of the event in Trabant felt like things were coming full circle.

“It was such a smashing success, and so, so much fun,” Donnelly said. “It was the 15th year celebration and it was crazy to be [back in Trabant], in the same exact spot that UDance had started. You truly felt so much community and togetherness in that room.”

Junior Kam Inguito, UDance representative for the Filipino Student Association (FSA), said he thought that the event was conducted very well given the circumstances.

“It was definitely a different feel,” Inguito said. “But overall, I’d say the people that planned the logistics of this year’s UDance did a great job making it as safe as possible.”

UDance raises money for the Andrew McDonough B+ Foundation  — a children’s cancer charity that honors the life of Andrew McDonough, who passed away from acute myeloid leukemia at the age of 14.

Despite the challenge of fundraising during the pandemic, UDance was able to raise $1,563,035.96 for the Andrew McDonough B+ Foundation.

“Joe McDonough [the founder of the B+ Foundation] said it on stage: ‘These were the hardest earned dollars UDance has ever fundraised,’” Donnelly said. “There’s a reason that we hold up all the way to that 96 cents. Every cent counts, every dollar counts, and every single person did their all and it really showed in what we were able to do this year.”

Inguito said that he found fundraising virtually difficult at first.

“We had to be creative,” Inguito said. “One thing that we did was we started an Instagram account titled ‘FSA thrift,’ and this was a way for us to sell clothes through Instagram. People would buy the clothing and whatever proceeds we made, we would donate directly to UDance.”

FSA raised more than $1,000 this year, surpassing their total from last year’s UDance.

“I was surprised,” Inguito said. “I thought not many people would donate now, but people showed out at my organization.”

“It was definitely difficult,” Fritz said. “Personally, I didn’t fully reach my goal in comparison to last year. Our chapter as a whole though [has] about 120 members, and a lot of our members weren’t able to fundraise as much as [I saw] them fundraise last year.”

DSP also got creative with their fundraising efforts. One member grew out his hair and then shaved his head on a livestream video, raising more than $2,000. Two other members held a 24 hour livestream of them playing Minecraft, where viewers could pay them to do different things within the game.

Each Greek chapter, athletic team, registered student organization and residence hall is paired with a child fighting cancer, known as a “B+ hero.” Through these pairings, students interact with their heroes and provide support, hope and friendship.

For their own safety, the B+ heroes were unable to attend the event in-person. However, Donnelly said they tried their best to make sure the B+ heroes felt included. This included a talent show where the B+ heroes performed over Zoom , as well as other small activities and games such as making crafts or playing Jeopardy.

“Our family relations team really rocked it with trying to make sure that they were included as much as possible,” Donnelly said. “On Saturday, they got a huge care package delivered from their representatives [with] t-shirts, tattoos, blow up microphones, boas … And then Sunday, they came to UDance decked out in all their stuff.”

Fritz praised the executive board for their efforts, though she said she wishes that the B+ heroes, who were not allowed to attend the in-person event for their safety, could have been incorporated more.

“The people who organized it did a really good job [of] keeping the same type of hype and excitement around it,” Fritz said. “I would have liked to see more involvement from all the B+ heroes instead of just a few of them, or the ones who were willing to unmute and talk. [But] I think overall, though, [my B+ hero] had a lot of fun.”

As graduating seniors, Lilley and Donnelly said that what they will miss most about UDance is the people.

“We call it a community, but it’s more of a family,” Lilley said. “You’re all fighting for the same thing, and nobody [else] will ever understand, or you’ll never have another community like this. I’m going to miss seeing these people every single day.”

Donnelly said that they will continue to be involved with UDance after graduation, and that they plan to stay in contact with the new executive board.

“We’re gonna try and rally the alums to create a stronger alumni base for UDance,” Donnelly said. “We can’t just have this be [such a big] part of our live[s] and then drop it off. I know that I’ll stay involved.”