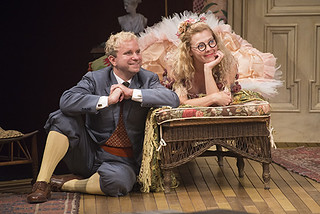 Courtesy of the REP
Lenny Banovez and Erin Partin from a scene of “You Can’t Take it With You.”

Whizzing fireworks, homemade masks of old presidents, unhinged Russian ballet teachers and called off engagements are just a taste of the whirlwind that is, “You Can’t Take it With You.” Audiences will enter the theatre prepared to chuckle and leave eager to call loved ones just to say, “I love you.”

A play about the peculiarly exuberant Sycamore Family, “You Can’t Take it With You,” teaches audiences the importance of living a life free of daily nuisances.

Alice Sycamore is engaged to socialite Tony Kirby. Alice’s mother is an aspiring playwright while her father and his friend, Mr. De Pinna make fireworks. Alice’s sister, Essie, is an inept ballerina and Essie’s husband is fixated with printing presses and xylophones. The patriarch of the family is Martin Vanderhof, who the other characters refer to as “Grandpa.” All of the characters live in one, cluttered house, eating corn flakes and tomatoes for dinner. The play breaks into chaos, laughter and heartbreak when the Kirby family unexpectedly comes to the Sycamore house for dinner.

“It is more than just humorous — it is uplifting,” Sanford Robbins, producing artistic director, writes in his director’s note. “Through its humor and unique charm, it strikes at something very deep about families.”

The lighthearted and comfortingly honest story about the uniqueness of families transformed the Thompson Theatre on Sept. 21. Actors of the Resident Ensemble Players (REP) embraced their characters to give a truthful telling of this quirky comedy.

The show begins with Elizabeth Heflin who plays the mother, Penny Sycamore. She is sitting at her typewriter wearing three different glasses atop her head. Penny reaches into a skull filled with candy and diligently works on her latest play, where the character has been stuck in a monastery for six years. Heflin’s quirky charm made it impossible not to fall in love with her.

Her performance was both entertaining and heartbreaking. When the realization struck Mrs. Sycamore that her eldest daughter was leaving home, Heflin embodied the perfect portrayal of a mother in distress. The audience’s silence filled the theatre as Heflin sobbed in the same chair she started act one in.

The relationship between Heflin and Stephen Pelinski, who played Paul Sycamore, was that of unwavering support. Throughout the play, Mr. Sycamore is a man of little words, mainly actions. He walks fervently across the stage to show various family members his fireworks and then scurries back to the basement to whip up more. However, during the idiosyncratic dinner with the Kirby’s, Pelinski, who has little dialogue in the scene, exhibits intense listening. He is fully engaged with the other characters during his silent moments. It is no shock when later in the show, Mr. Sycamore confesses his insecurities of the type of father he has been.

Nearly every character exhibits the utmost peculiarity during act one. They’re ignorant to real world stresses until being presented with the Kirby family. In act two, when Alice Sycamore decides she is leaving home, the lively Sycamore’s go off beat from their every day shenanigans. Exhibiting that every family — no matter how odd — thrives on love and understanding.

The transition from act one to act two is painstakingly honest which is demonstrated most strongly from the performance of James Black, playing the character Martin Vanderhof (Grandpa). Grandpa’s importance is emphasized throughout the whole show, from him leading prayer at dinner to Essie and Ed asking his permission to have a baby. The show comes full circle when Grandpa sums up the lessons of, “You Can’t Take it With You” in his monologue toward the uptight Mr. Kirby.

Black’s ease and laid back demeanor is overwhelming when he tells Mr. Kirby, “You’ve got all the money you need, you can’t take it with you.” He continues, “We haven’t got too much time, you know, any of us.”

This show is a reminder to let the trivial pursuits of everyday life be. During a time of such uncertainty, the cast of, “You Can’t Take it With You,” awoke the audience to the importance of understanding and unconditionally loving one’s family.

“The Sycamore philosophy serves as a source of hope and vigor as we deal with the harsh realities of this moment of history,” Robbins writes. “We must be able to proceed with joy and laughter as we traverse difficult times.”