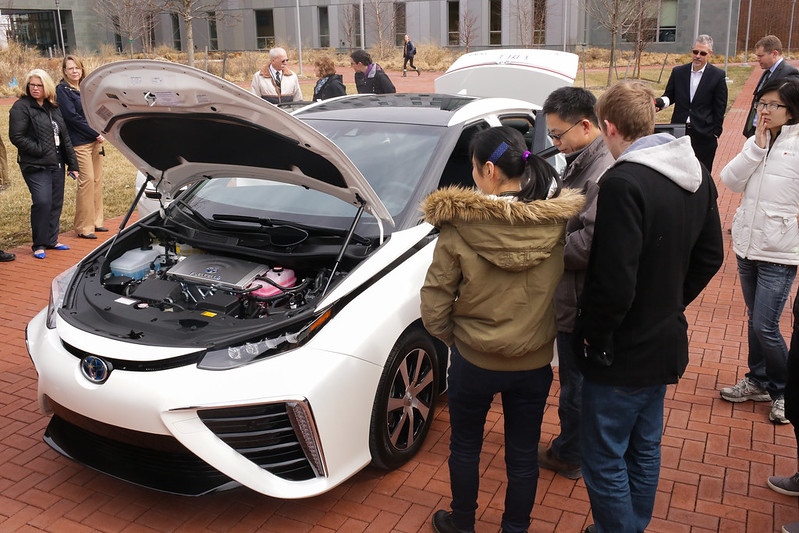 Students and faculty got a glimpse of the future of automotive technology last Monday as Toyota presented its new Mirai fuel-cell car outside the Interdisciplinary Science and Engineering Lab.

The Mirai came to the university as part of Toyota’s city-to-city tour of the car—but the fact that the university is looking into fuel-cell experiments was also a factor in the car’s Newark stop, Ajay Prasad, a mechanical engineering professor, says.
The car, which is built on Corolla’s platform, features two 5-kilogram hydrogen tanks, which take about five minutes to fill up, according to Toyota’s website. The car then sucks in air through the front radiator to the fuel cells, where the air meets the hydrogen and creates electricity to power the 157-horsepower motor. This process moves the car, making water its only emission.
The designers crafted the car to have its own look, Robert Wimmer, director of Toyota’s Energy and Environmental Research Group, says. 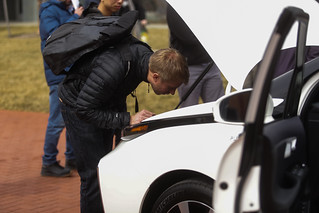 “It really is unique,” Wimmer says. “‘Mirai’ means ‘future,’ so [the designers] wanted something futuristic.”
Wimmer says the car has undergone extensive testing in environments like the Mojave Desert and Yellowknife in the Northwest Territories of Canada to showcase its strength in extreme cold and heat.

The car is quiet, with only a slight hum from the motor, Wimmer says. Toyota has added artificial sound so pedestrians will hear the car coming.

Wimmer says Toyota is not only furthering its own technology but also working to build the systems of rival brands’ vehicles required to make this new technology viable. Toyota has also partnered with Air Liquide, a company with offices in Delaware, to help create the infrastructure needed to run the car, Wimmer says.

Toyota also brought a second Mirai for providing a few test rides. The Review had an opportunity to take a spin in the car, which proved to have impressive qualities.

Despite its Corolla underpinnings, the quality of the Mirai’s interior matches that of a Lexus or any other luxury brand. A large “infotainment” screen sits dead-center in the car’s dashboard, with heating and air conditioning controls below it. There is a small joystick with which to activate the gearbox, and when the car turns off, the seat and steering wheel move back to ensure easy exit.

The Mirai’s 157-horsepower motor has the acceleration of a car with twice its power. On the road, the car quickly sped up to 35 mph, though the sound of the motor never changed.

Wimmer says the Mirai is currently only on sale in Japan, where 1,500 orders were placed for the car within a month of its December release. It will arrive in the U.S.—first in California, then in the Northeast—later this year, priced at $57,500 with a $5,000 government tax break.

The Mirai has a 300-mile range and, during testing, regularly gets 60 miles per kilogram of hydrogen, Prasad says.
Prasad says the car will be hindered by a lack of infrastructure at first. He calls it a “chicken and egg issue”—while cars like the Mirai need to sell to create demand for the infrastructure in the U.S., Americans will want to see a finished infrastructure system before they buy the car.

But he also says the car’s technology has the potential to change the minds of many who have known gasoline power all their lives.

“Internal combustion engines have been around for 100 years, and they’re as popular today as ever,” he says. “So when fuel cells come in, which are much cleaner, which have much cooler technology within—why not?”