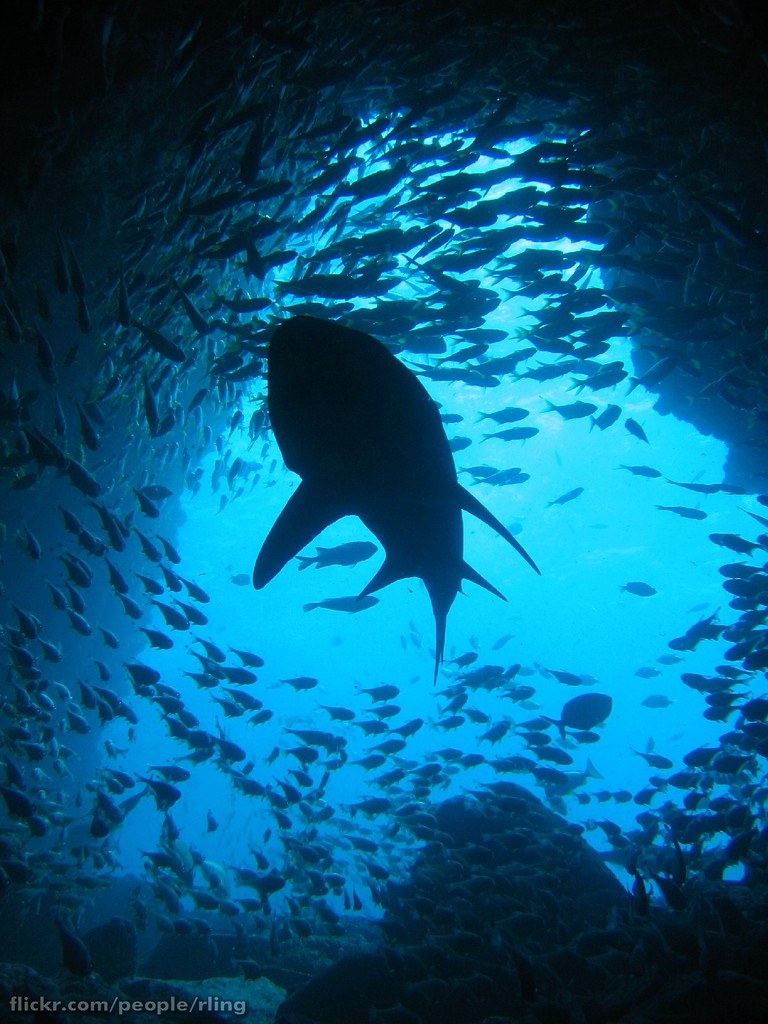 Courtsey of Richard Ling
New research on the inter-personal relationships of Sand Tiger Sharks sheds new light on a species many denigrate.

Sand tiger sharks: colossal gray bodies, armed with rows of protruding, pointed teeth. How are human beings moved to care for a creature historically viewed as a “mindless predator”?

A research essay published in Nature scientific constructs a story of this creature which transcends the rows of razor-sharp teeth and delves into the intricate social patterns of sand tiger sharks.

The research was funded by philanthropists Patricia and Charles Robertson, who wanted to support a project which would take risks that would ultimately breach scientific boundaries. Through the use of fairly new technology, which had little testing and never used with a research project of this scale, Haulsee and Oliver aimed to contribute towards sand tiger shark conservation efforts.

“We need to be stewards of the earth,” Oliver said. “The more we know about what these organisms are doing, the better we can accomplish that.”

For their research, 20 sand tiger sharks were implanted with a transceiver, a hybrid of a transmitter and receiver. The transceivers omit and receive signals from other tags, which told the researchers which species the sand tiger came in close range with during its migration.

Prior to 2012, professor and co-author of the research essay Dewayne Fox of Delaware State University had begun research on sand tigers. Like Haulsee and Oliver, he hoped the work would lead to conservation efforts. Due to his research, there were approximately 300 other sand tiger sharks tagged with a transmitter in addition to the 20 who donned the transceiver.

After a year of allowing the sand tigers to go about their regular migration pattern, the research team began the tedious task of recapturing the same tagged sharks when they returned to the Delaware Bay.

At the completion of the recapture process, two male sand tigers were recaptured, which proved a 10 percent recapture rate. In the realm of tagging technology, this is a decent result, Oliver said.

The transceiver results revealed more than anyone on the project had originally foreseen. While the research team had already known that sand tiger sharks group together in the Delaware Bay during the summer, their group dynamics beyond that point were a mystery.

From the data on the transceiver, they discovered that the two male sand tiger sharks encountered more than 50 percent of the 300 tagged sharks whilst on their journey outside the bay. In addition, the sand tigers seemed to form sexually-segregated groups. The transceivers also showed that many of the sharks encountered others from their group several times during the year and spent multiple hours in close range with them.

“More and more, we’re finding examples of sharks that form groups,” Haulsee said. “They’re interacting with each other in a way that goes beyond this mindless predator with one thing on its mind.”

Sand tiger sharks, though not yet endangered, have one of the lowest reproductive rates of any shark species. Commercial and recreational fishing, in tandem with habitat degradation, has increased the possibility of sand tiger sharks becoming endangered.

“The loss of sand tigers in our ecosystem would very likely have profound impacts on the rest of the community,” Fox said. “[Y]ou cannot remove the top predator without shuffling the rest of the deck.”

Haulsee said the researchers aim to use their work to give people a reason to care for this creature which may have been previously viewed as a “mindless predator.”

“I hope that the complexities of their migrations and their group behavior…interests people,” Haulsee said. “And I hope that it helps them care a little bit more about a shark species that is important in our area.”