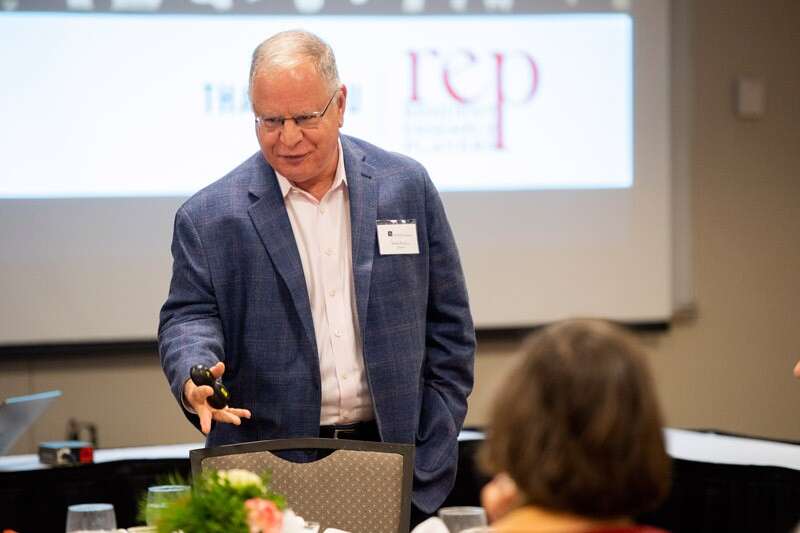 Theatre Department Chair and Producing Artistic Director of the Resident Ensemble Players (REP) Sanford “Sandy” Robbins is retiring after 33 years of working for the university. On Aug. 31,  2022, he will withdraw from his leadership positions. After a year of retirement leave his official last day will occur on Aug. 31, 2023.

While many colleagues and students may be disappointed to see him leave, his career at the university was a long one filled with many projects and shows that involved the university and local communities.

Robbins first came to Newark in 1989 when the university asked him to bring the Professional Theatre Training Program (PTTP), the theater training program he founded, to Newark and the university. Throughout its 22 years of operation, it had a unique system of accepting a small class of individuals every four years and consisted of three years of training and one year for auditions. Additionally, the program was funded so each student was able to attend tuition-free and leave the program without debt.

Several years later, in 2008, Robbins founded the REP and became the producing artistic director of the company. According to its mission statement, the REP’s overall goal is to put on high-quality productions at an affordable cost so that all in the university community can access theater. Robbins additionally serves as the chair of the Theatre Department at the university, with the ensemble members of the REP also serving as professors in the department.

However, after years of work founding and developing theater at the university, Robbins has decided that his time working for the Department of Theatre and the REP has come to its natural end. Due to pandemic-related budget cuts and subsequent faculty downsizing, instead of producing six to seven shows a season like they usually do, the REP will only be producing two to three shows a season for the next couple of years.

The smaller number of shows will allow new personnel to get acquainted with the REP and offer opportunities for future leadership to take new creative directions with the REP and its productions. Nonetheless, Robbins is still proud of all he has achieved as head of the REP.

“I am enormously grateful for the opportunities I have had at UD and especially for the privilege it has been for me to participate with the many people who have made my work here possible,” Robbins wrote in a recent personal message. “I am proud of and grateful for what my colleagues and collaborators and I have achieved together.”

After his retirement from the REP, Robbins plans to take on projects as a director, including and not limited to a production of “King Lear” that is currently raising funds. Although he is leaving the theater company he founded, Robbins has no concerns for the REP’s future.