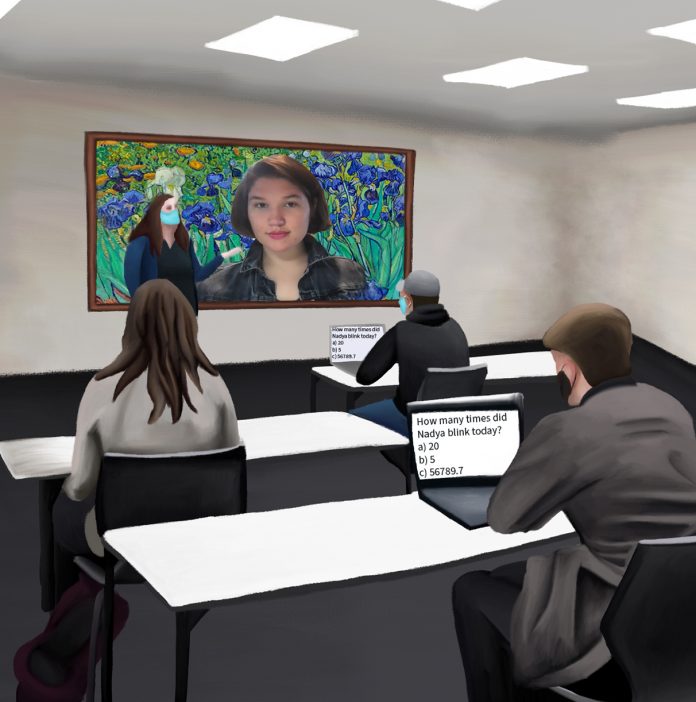 It sounds pretty cool, like something the Terminator or Elon Musk would do to prepare for the ACT.

Admittedly, though, after more than a month of hybrid learning, I’ve been feeling a little flat as of late — probably because I’ve been relegated to a two-dimensional projection on a screen.

Like Matthew McConaughey in that Super Bowl Doritos commercial or Flat Stanley, I have essentially been stripped of my total physical being, except I do not retain a multimillion dollar net worth or have my own children’s book series (yet). It has taken me a long time to realize that eating chips and attempting to mail myself across the United States cannot solve my problems, and this time is no exception.

Don’t get me wrong — having two hybrid classes isn’t all that bad. I’m definitely putting the learning in “hybrid learning” (I’m working on copyrighting that). While I can no longer wear the same shirt three times in a row without people noticing, I still get to relax in my comfy desk chair in leggings I’ve owned since the 6th grade.

However, I’d be lying if I said there weren’t a few things about hybrid learning that I haven’t grown quite accustomed to.

For starters, being called on in class (those of us on Zoom, that is) is like “The Price is Right,” except there’s no glittery wheel to spin, and I can’t win a hot tub. The only spinning thing is that little rainbow lollipop when the connection fizzles, and the only prize I’m in this thing for is knowledge.

We never really know who’ll be picked unless we put that cute li’l hand that catapults us to the top left of the screen up or when one of us goes rogue and unmutes without being asked. It’s hard to play the “don’t make eye contact” game because it’s impossible for us to really make eye contact with anything.

When I do happen to get called on, instead of screaming and jumping with unrestrained joy, there is only a dramatic pause as I move my cursor to press “Unmute.”

I never even know where to look: at my virtual classmates, my professor, or straight into the eye of the camera? The last one sounds too unnerving for my in-person classmates.

I have never found “The Truman Show” so profound until now. I’ve never seen the whole thing, but I’m pretty sure the scenario is basically the same even though, rather than being viewed for the entirety of my day, I am merely gazed upon by the outside world for about 100 minutes three times a week.

I am Zoom; I am PowerPoint; I am Adobe Acrobat Reader. I have become the mere construct of a projector, and I’m not quite sure who I am anymore.

One of me is already enough of a handful for this world, yet there are three of me now: slouching-at-my-desk-in-the-Midwest Nadya, Zoom room Nadya and peering-behind-my-professor’s-shoulder-on-a-projector Nadya. Which one of them is truly me is no longer clear, and it is anything but soothing.

YouDee, YouDee, what do you see? I see two Nadya’s looking back at me.

I have attained a fair certainty that I am now living in a simulation, as I haven’t asked myself this many questions since I realized that the voice I speak in sounds different than the voice I think in.

I think, therefore I am. But what if my thoughts are merely programmed by strings of Zoom code? Are they protected by end-to-end encryption? Is my entire being protected too? Since we all have the Zoom Pro plan, I would certainly hope so.

Are the people on the outside Zoom Bombing me? Or is the ill-defined separation between an in-person classroom and virtual classroom in and of itself password protection?

When my mom walks past me during class, does she become a student too or is the fact that my Zoom background covers her a nullifying factor?

When I turn my video off to sneeze (because no one, in-person or virtual, needs to see that), do I cease to exist entirely or only to the people watching me? Do I only exist when my professor looks at me? Do I no longer exist when the meeting ends?

Are glitches correlated with me doubting my existence? Do I even really exist anymore? Because as far as I know, even with makeup caked on my face, my skin does not look that clear in real life.

Through all this, I’ve taken the liberty of assuming that I am now part of the course content. Although it’s not explicitly written, I’m sure there’s a sort of implied stipulation in the syllabus that both the course material and Nadya are to be paid attention to at all times.

The fact that both classes are foreign language courses is entirely irrelevant.

As long as I don’t become a Kahoot! I can live with this. After all, the only alternative I could possibly think of is having me in the classroom in hologram form, and that would necessitate my wearing decent pants. I’ve got to choose my battles wisely here.