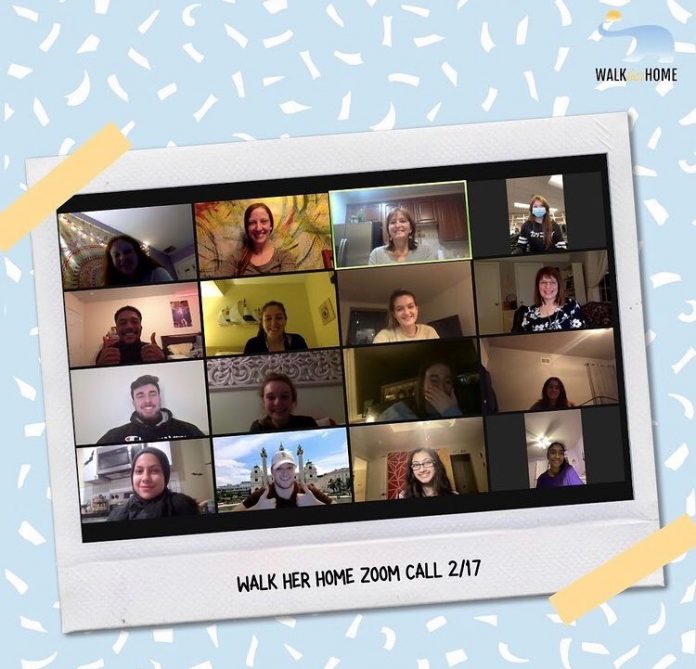 In January, the university launched its very own Walk Her Home resident student organization (RSO), inspired by the parent Walk Her Home charity organization that strives to fight human sex trafficking and sexual exploitation in the United States.

Walk Her Home strives to empower young people to spread awareness and educate their peers on sexual exploitation. The organization encourages high school and college students to start a club at their school and host events for students that are both fun and educational.

The first high school to start their own Walk Her Home club was Rustin High School in West Chester, Pennsylvania. In its first year, the students put together a successful event called “Movie Night Under the Stars,” in which they played an anti-trafficking video created by members of the club, and the Disney film “Up” projected on an inflatable screen. They were able to raise $3,000, and over 300 people attended the event.

“I find high school and college kids to be the most creative people on the planet,” Susan Ingram, president of Walk Her Home national organization, said. “So, when it comes to having fun and creating an event to do that and tell a story, I think there’s no better spokesperson to do that than kids.”

Morgan Wright, a sophomore political science major, was inspired to start a Walk Her Home RSO at the university after meeting Ingram her freshman year.

“Sue is so inspiring and so great – I loved hearing how passionate she is about the organization,” Wright said. “I’m a survivor as well, so we really connected on that level.”

Growing up, Ingram herself experienced domestic violence, which sparked her interest in women’s issues. Her passion for anti-trafficking began when she was the co-chair for a project for the International Justice Mission in 2010. The committee was asked to do an assessment on human trafficking in the Greater Philadelphia area — they were astounded by the data they found and the extent of the problem.

A few years later, Ingram helped a committee member raise funds for a film project on human trafficking. While she was working on this project, Ingram went through her own personal experience of sexual assault at Massage Envy, a massage and skin care franchise.

Her lawsuit ended up being the first of 200 cases against Massage Envy that was able to hold the corporation accountable.

“That experience drove my commitment to seeing what I could do to start to protect women and boys and girls from the risk of sexual exploitation and human trafficking,” Ingram said.

As president of Walk Her Home, Ingram serves as an educator for young people on topics of sexual exploitation in hopes to inspire a movement among the younger generation. She also serves on the board of the National Trafficking Sheltered Alliance and is on the advisory council for the National Center on Sexual Exploitation.

Inspired by Ingram’s message, Wright wants the club to be a place where students can be educated on how to feel safer and how to keep their friends safe. She hopes to raise funds for Walk Her Home by conducting training events on how to look out for signs of human trafficking, particularly concerning internet safety. She has also started working on an informational campaign for National Slavery and Human Trafficking Prevention Month.

“As college students, we are the most susceptible to be trafficked,” Wright said. “And I don’t think we get educated on that in high school.”

Walk Her Home is still a relatively new RSO on campus, so Wright encourages anyone who is interested to join. She hopes to complete the RSO process soon and be able to have enough members to elect executive board members in the near future. The club does not have weekly meetings yet, but they have monthly meetings with Ingram and other Walk Her Home clubs around the country.

For more information, reach out to mwright@udel.edu or refer to https://walkherhome.org/