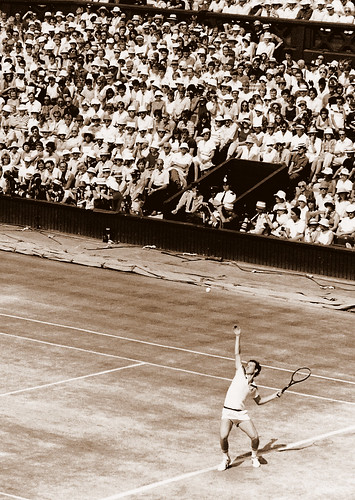 Watching the Federer-Monfils U.S. Open quarterfinal match on Thursday night, I couldn’t help but think of the semifinals three decades earlier and the excitement surrounding them. Dubbed “Super Saturday” by CBS and “the greatest day in tennis” by my father who covered the matches, the first semifinal was a five-set masterpiece.

Held up due to a legends doubles match between Stan Smith and John Newcombe, the Ivan Lendl-Pat Cash semifinal went into two tiebreakers in the last two sets. Cash won the fourth, while Lendl made his third straight final by winning the fifth.

All this, including the women’s final won by Martina Navratilova over rival Chris Evert, was a prelude to the ending of a rebel in the dystopian world of professional tennis’s run at the top. When John McEnroe took Jimmy Connors to five sets and into the wee hours of Sunday morning, nobody watching could have predicted this would be Mac’s last major victory considering the season he had going into the Open.

McEnroe had absolutely annihilated Connors in straight sets at Wimbledon to claim his third title at the All England Club, sight of his most famous rebellions under the watchful, pompous eye of “Big Brother” or the Wimbledon officials. He was in true form for New York where he had taken three straight titles from 1979-81, the last two being barnburners against Sweden’s Bjӧrn Borg, who retired not a minute after his 1981 Open loss to McEnroe.

Having taken Borg’s retirement harder than anyone as he was a friend and fellow rebel, McEnroe began to piece his game back together in 1983. He switched from the famous wooden Dunlop Maxply racquet––which had claimed numerous major titles since the 1930s––to a graphite Dunlop Max 200G and broke Lendl’s 66-indoor match winning streak in Philadelphia in 1983.

McEnroe entered the 1984 season fitter than ever, beating Lendl in the Masters final, tennis’ version of the year end playoffs, in Madison Square Garden in January.

Before arriving in New York City in August, the young superstar had taken 10 titles from 12 tournaments. His only two losses coming into the final major of the year were the French Open to Lendl when, two sets up, he had a meltdown and lost the next three sets, and a minor tournament where he pulled out to be in top form for Flushing Meadows.

This top form showed as Mac blew through players in the first five rounds of play in straight sets before running into Connors.

Having fought to the death against Connors, no one would have expected McEnroe to beat Lendl at 4 p.m. on Sunday and neither did Mac. He wrote in his autobiography, “You Cannot Be Serious,” that he honestly thought Lendl would beat his stiff body into the ground until he saw Lendl could barely touch his toes in the locker room before the match.

Having blown out Lendl in straight sets, McEnroe went on to claim two more titles in San Francisco and Stockholm to finish up with 13 titles from 15 tournaments, but the year, and his career, were about to take a slight fall.

Like every great dystopian hero, McEnroe was undone by both a love interest and a betrayal by a close compatriot. Having met actress Tatum O’Neal at a party in Los Angeles, McEnroe fell in love (they were married in 1986) and decided not to play the Australian Open.

After that, he was betrayed by his own country’s tennis association after his antics in the Davis Cup (tennis’ version of the World Cup) led to a behavior contract for 1985, which he did not sign. After that, McEnroe didn’t play for the United States for two years.

Though Mac’s 1984 match record was 82-3––a feat only Roger Federer came close to in 2003––he never achieved success like that again. He may have claimed nine titles in 1985 and lost the U.S. Open final to Lendl, but that was the beginning of a lean period for him. He took a sabbatical in 1986 and when he returned, he was never quite the same player.

Despite a few flashes of brilliance, namely the 1990 U.S. Open where he lost to Pete Sampras in the semifinals as well as his last Wimbledon in 1992 where he lost to Andre Agassi in the semis but won the men’s doubles with Michael Stich, the images of 1984 never seemed to return. It always seems to be the rebels that have the hardest fall.