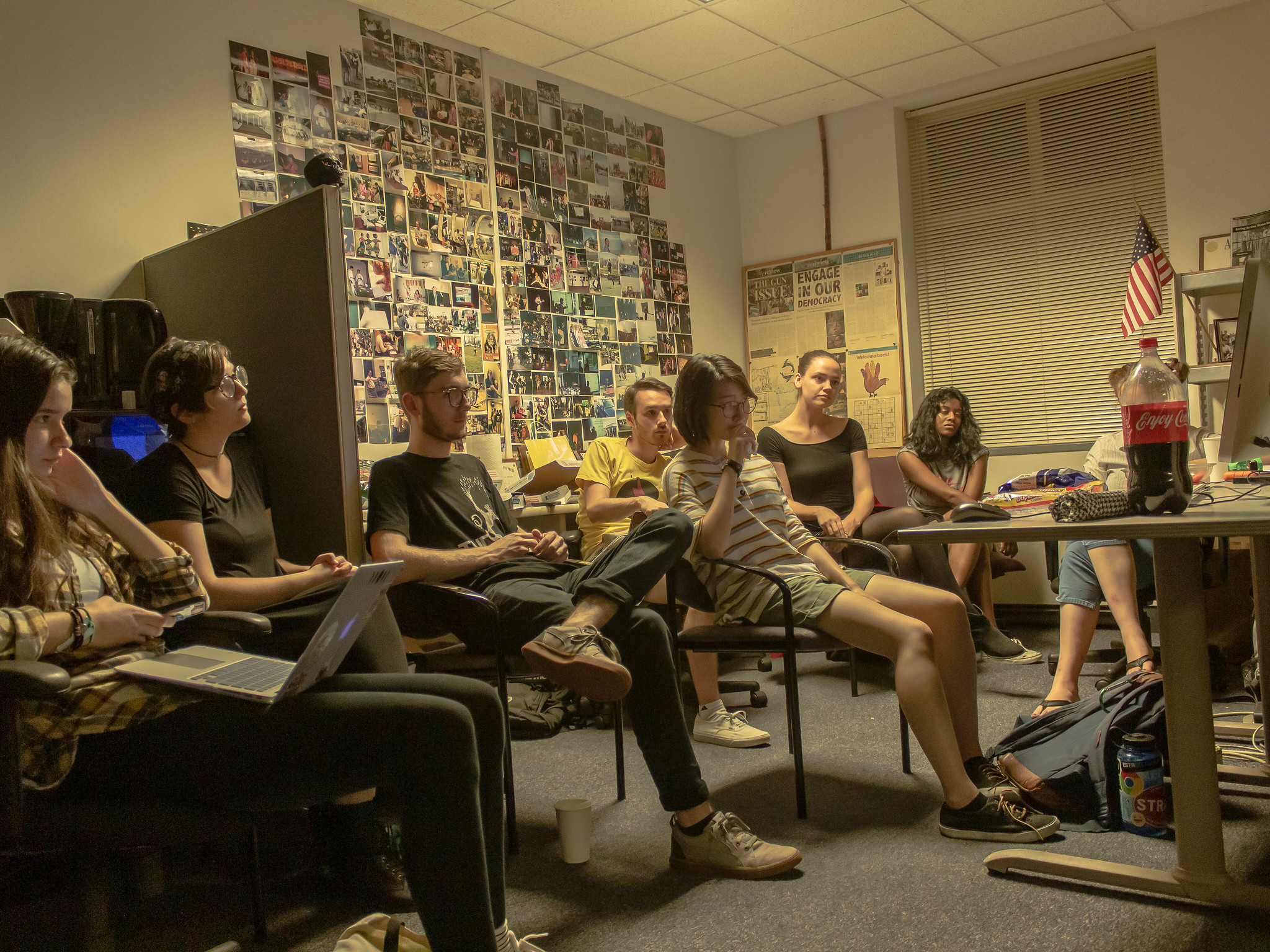 Luke Chalmers/THE
REVIEW
Students across campus reacted to the last week’s Democratic Debates, which made history with 12 candidates debating at once, the largest number in history.

Last week’s Democratic Debates, which aired on Oct. 15, made history with 12 candidates debating at once, the largest number in history.

Multiple media outlets agree that Elizabeth Warren stood out in the debate, as well as university students who watched, including Kelly Read, vice president for College Democrats.

“Elizabeth Warren is standing out a little bit more tonight as aggressive, not in a bad way,” Read said. “But definitely just asserting her dominance and position on that stage saying ‘I’m a top contender, my policies are supported by a lot of Americans, hear me out.’”

Warren came under fire throughout the night, notably critiqued by Mayor Pete Buttigieg of South Bend, Indiana, who accused Warren of refusing to give “a yes or no answer” to a “yes or no question” regarding how she would fund her plan for Medicare for All.

“Your signature, Senator [Warren], is to have a plan for everything,” Buttigieg said. “Except this.”

Buttigieg, another candidate who stood out, had his biggest night yet. In addition to his quarrel with Warren, he debated Beto O’Rourke on gun control. Buttigieg claimed O’Rourke didn’t have a plan for mandatory buy-backs of AR-15’s and AK-47’s. In response, O’Rourke said they need to follow the lead of students “marching for their lives” and rallying for gun control, still unable to answer how he would enact his plan, but recognizing advocates as courageous. Buttigieg then told O’Rourke he didn’t need a lesson on courage.

In previous debates, former Vice President Joe Biden routinely took the heat from other candidates, but had a much easier time last week. Most attacks were targeted at Warren and her policies. Biden was questioned about his son’s alleged involvement with Ukraine, but was met with no other questions or comments from other candidates.

“I think that with everything going on with President Trump and Biden’s son, I think that the entire field can agree that the attacks coming from the president onto Biden [are] unfair,” Read said.

Bernie Sanders, another front runner in the polls, tried to appease concerns about his health by stating that he would run a vigorous campaign to reassure voters that he is up to the task of being the president. Joe Biden was also asked to defend his ability to serve as president, as he would turn 80 in his first term if elected.

“One of the reasons I’m running is because of my age and experience,” Biden said. “With it, comes wisdom.”

Cory Booker acted as a buffer between the candidates on stage, clearly upset by the attacks on one another.

“Tearing each other down because we have a different plan is unacceptable,” Booker said.

California Senator Kamala Harris was the first to raise women’s reproductive rights as a serious issue facing the United States.

“This is the sixth debate we have had in this presidential cycle and not nearly one word, with all of these discussions about healthcare, on women’s access to reproductive health care, which is under full-on attack in America today,” Harris said. “It is not an exaggeration to say that women will die, poor women, women of color, will die.”

Climate change was not mentioned as a main topic of debate last week, which is something that Meghan Mullennix, a junior political science major, said she was eager to hear about.

“I think that’s a big one, probably the most important issue in the grand scheme of things,” Mullennix said.

Mullennix also said she found the debates “repetitive” and didn’t think that the candidates fighting with one another and picking apart each others’ policies were “productive.”

MSNBC and The Washington Post will host the next debate on Nov. 20 in Georgia.