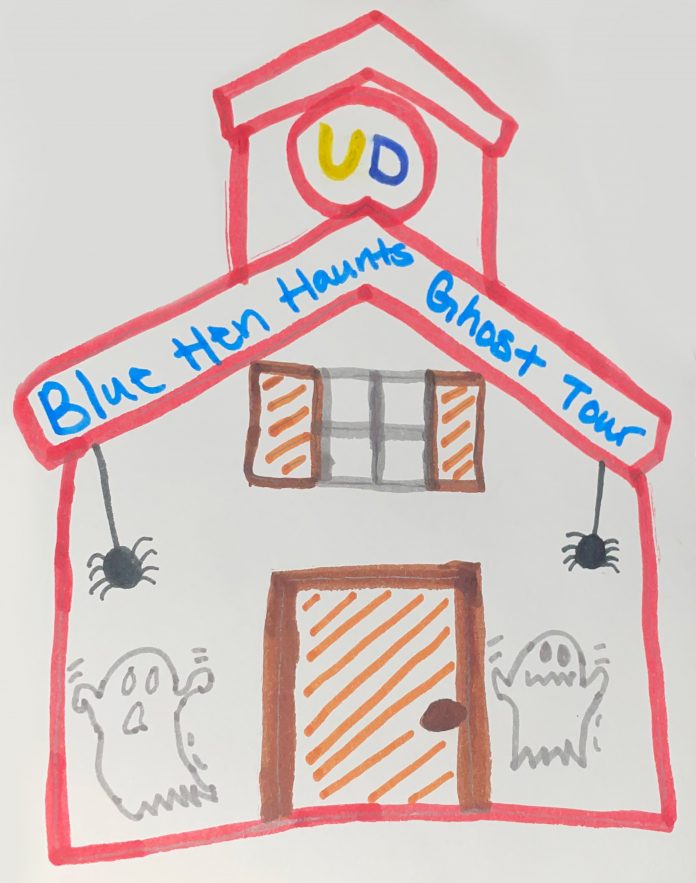 
What do Mitchell Hall and Old College have in common? According to university alumnus Scott F. Mason, both buildings are haunted.

The tour began at Mitchell Hall, where Mason introduced himself and asked the audience about their existing knowledge about the university’s ghosts. He also discussed the most recent ghost, which was spotted in the 1990s by a residence hall director.

“She was standing there in her room, and then from an archway that adjoins to another room, she suddenly saw this outline in white, glowing white, of which she perceived to be a woman, and suddenly, this apparition that was outlined in white said to her that ‘Everything is okay, everything is fine, everything will be okay,’” Mason said.

According to Mason, the woman reported her story to The Review and to the administration, but it was never investigated further.

“The current legend is that if you kiss your loved one five times under these arches, then you will have a happy future,” Mason said.

He added that this legend originated during the time that the university existed as two separate colleges: one for men and one for women. According to Mason, it is commonly believed that men and women would kiss each other goodnight at the arches, which were located between the two parts of campus, before heading their separate ways.

Mason elaborated by saying that the arches were not built until 1941, right before the two colleges merged into one.

Afterwards, Mason discussed another well-known university tradition: rubbing the nose of the bust of Judge Hugh M. Morris in Morris Library in order to pass an exam.

“If you have to resort to rubbing some body part of a statue in order to pass a test, maybe you should rethink your career plans,” Mason said.

From there, Mason led the tour to the cemetery off of West Delaware Avenue, where he explained the death of a boy who was attending Newark Academy during the American Revolution. The boy, Mason explained, snuck away from the academy building to Cooch’s Bridge and enlisted in the militia. When the boy’s father found out about his son leaving the academy, Mason said that the father dragged the boy back to the academy by his ear.

“The son was so distraught, embarrassed, mortified by what his father had done … that that night he hanged himself in the bell tower,” Mason said. “[Now] staff will not work there by themselves at night.”

The next legend brought up on the tour was regarding Deer Park Tavern. Mason explained that many believe the tavern to be cursed by author Edgar Allan Poe.

The actual story, according to Mason, is that Poe gave a lecture at the Newark Academy in 1843 that was not well-received. Angry, Poe headed to what was then the Saint Patrick’s Inn. On the way, Poe fell in the mud, got drunk and got thrown out of the inn, afterwhich Poe cursed the inn, saying that “Those who leave will have to return.”

In actuality, Deer Park Tavern was built in 1851 after the Saint Patrick’s Inn burned down.

“If you look at that raven that they have in the glass box, they shouldn’t have it because he was never there,” Mason said.

The tour continued to Old College, where students stood in the lobby while Mason told the story of John Roach, a student who was murdered in the building during a literary competition in 1858.

During the competition, the students played pranks on each other and got in a fight, resulting in Roach’s throat being slit. No knife was found, and the three students who were arrested on suspicion of being the murderers were all released. A year later, one of the three students had his throat cut in the same way that Roach’s was by a piece of shrapnel in an explosion in a steel factory.

Mason added that later on that in the 1900s, a man fell down the steps of Old College and broke his neck after harassing a woman at the top of the steps.

“Some people say that was the ghost of John Roach,” Mason said. “He’ll leave you alone if you’re nice. But if you’re mean, beware.”

Last on the tour was Mitchell Hall. Mason explained that the ghost of a construction worker, supposedly named Elmo, who was working on the dome of the hall fell five stories from scaffolding, meeting his death as he landed in the seats below.

According to Mason, his family died one year later under mysterious circumstances and now haunts Mitchell Hall along with Elmo.

Mason concluded the tour with a warning to his audience.

“Do be careful if you’re in a residence hall on the Central Green,” Mason said before departing.