The Biden Institute and the Biden Presidency 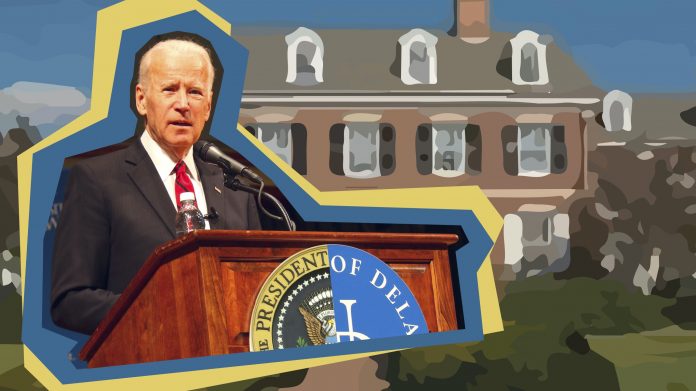 All these words describe Joseph R. Biden, in addition to “president” as of this past January.

When Biden, affectionately known by Delawareans as “Uncle Joe,” arrived in Newark to embark on his educational journey some 60 years ago, he likely would not have guessed that these words would come to represent the arc of his professional career and life.

Biden’s time in the national political scene had appeared to conclude at the end of Barack Obama’s presidency, unfortunately coinciding with tragedy in the death of his son, Beau Biden, who passed away from brain cancer in 2015.

Following his departure from Washington, D.C. in 2017, Biden and the university announced a partnership to form the Biden Institute, a research institute dedicated to policy discussion and advancement of several issues, including criminal justice, civil rights, women’s rights, environmental reform and more.

The institute hosts events, seminars and presentations by guest speakers, extending invitations to university students, faculty and occasionally the public.

Cathy McLaughlin, executive director of the Biden Institute, and John Cohill, a junior public policy and administration major, offered their perspective on the institute’s work.

McLaughlin added that their “mission is civil conversation amongst people … we just want to make sure that these are opportunities that Delaware students get.”

The emphasis on promoting policy discussion among the youth, especially college-aged individuals, has contributed to Biden’s popularity among university students.

Biden served as founding chair of the new research institute until his candidacy for the 2020 presidential campaign began, when, to avoid a conflict of interest in his direct involvement with an institution of higher learning as presidential candidate, he stepped down from the position.

“He ran for office; there was a divide between the Biden Institute, the campaign, and the administration team over the conflict of interest it could have created,” Cohill said. “So as he announced his running for presidency, the Biden Institute had to say that he would be removed from the position.”

Stepping down from chair by no means diminished the Biden family’s role in shaping the policy discussion within the university and its student body, as other members of the family have accordingly filled the gap that was created.

Valerie Biden-Owens has played a central role in the operation of the Biden Institute since the start of her involvement, especially in helping facilitate many of the events held by the institute. She has hosted a slew of guests to speak to university audiences, including White House photographer Pete Souza, Secretary of the Smithsonian Institution Lonnie G. Bunch III, and former mayor and presidential candidate Pete Buttigieg.

Prior to working for the Biden Institute, McLaughlin and Biden-Owens met at Harvard working as executive director of the Kennedy Institute of Politics and as a resident fellow, respectively.

“Valerie was a fellow at the Institute of Politics; she loved everything about her fellowship, loved the time that she spent with students and the programming that they did. She and President Biden thought this would be a great thing to bring to the University of Delaware,” McLaughlin said. “They wanted to do some kind of memorial to now President Biden at the school … They started a combination of a policy institute and a place where they could engage students and offer opportunities to meet with high profile guests, and people who have been working in the real world of politics to try to talk about issues of concern.”

To that end, the Biden family and university staff and faculty have worked to engage with students through their events and policy outreach. The Biden Institute created the Student Advisory Council (SAC), consisting of 25 or so students each semester that provide input regarding the topic and scope of events and speakers.

Cohill is a student advisor, and stated that “in terms of the progression of the institution, we have better access to personnel, in terms of virtual events, for people to come and talk to us about their experience. I think it is a great benefit for students like myself and students across the campus.”

While involvement with institutions of higher education is not uncommon among former presidents and vice presidents, the relationship between the university and Joe Biden is unique. The Biden Institute is currently the only operating institution of higher learning associated with an incumbent president or vice president.

The university and the institute, through Biden’s notoriety as former vice president, have been able to operate as a center of policy debate, attracting a plethora of speakers to contribute their perspective to the discussion. Now, as the former vice president settles into his new role as president, the possibilities for the Institute going forward appear broad and promising.

Past speakers like Souza, Bunch and Buttgieg, alongside the endless special events, seminars and policy dinners that the Biden Institute offers to students have potential to expand with the added influence of having a Blue Hen in the White House.

Already, the institute has been able to attract prestigious speakers to visit the university virtually, with David Beasley, executive director of the World Food Programme and 2020 Nobel Peace Prize Recipient set to visit via Zoom on April 7.

“The interesting thing, the good and the bad about COVID, is that through our virtual events, we have an endless number of people we can engage,” McLaughlin said. “For the Pete Souza event, we had somebody in Korea, somebody in Italy, somebody in London.”

According to McLaughlin, Biden also serves as a symbol of inspiration for students arriving for the first time as well as those returning for another semester in Newark.

“Students see that Joe Biden went to this college, walked the same halls that I walked, and now is President of the United States….” McLaughlin added, regarding how Biden has served as a model for students at the university. “The positive of this is that young people are excited, they want to make a difference, they want to be engaged in this process.”

There is certainly an extra buzz in the political atmosphere — if not the halls and grounds themselves — around campus this semester, as the administration’s building momentum coincides with the arrival of spring. Having just passed the massive $1.9 trillion American Rescue Plan and with discussion of a colossal infrastructure and climate policy package circulating, Biden appears to be capitalizing on his mandate to govern.

The Biden Institute continues to engage with students and promote its interest in public policy issues through guest speaker events and seminars. Staff and faculty at the institute play critical roles in nourishing the passion of university students in politics and governance, Cohill noted.

“The people that I interact with at the university and the Biden Institute, they have an interest in what you’re doing and learning; so if a professor, or an advisor, or a director of the Biden Institute knows what I have been doing outside of the classroom, or they’re interested in things that I have accomplished, I think it shows that they have a mutual respect for me,” Cohill said. “They are following you and encouraging you and seeing how they can help you build upon what you are looking for and push you forward.”

In the university community, the Biden Institute has occupied a valuable mantle in inviting students into the world of politics and government, fostering significant growth that is evident in the youth turnout this past election and the popularity of institute events and seminars so far this semester. While Biden no longer serves a direct role with the institute, there is no doubt that he will continue to shape the trajectory of the institute, the university and its students through his presidency and beyond.

Although visits from the only Blue Hen to be Commander-in-Chief may now be more rare than before, they know that he still places students and higher education among his chief priorities.

Both McLaughlin and Cohill emphasized the importance of the university and its community to Biden, especially considering the family’s ties to New Castle County and the president and first lady’s backgrounds as educators.

McLaughlin recounted one of Biden’s last visits to Newark before his campaign, saying, “We took him to lunch one day, and he said, ‘I just want to have lunch at Caesar Rodney dining hall, can’t we just have lunch with some students?’”