The D Sharps, the university’s premier all female-identifying acapella group, to open for the Rockettes at Radio City Music Hall 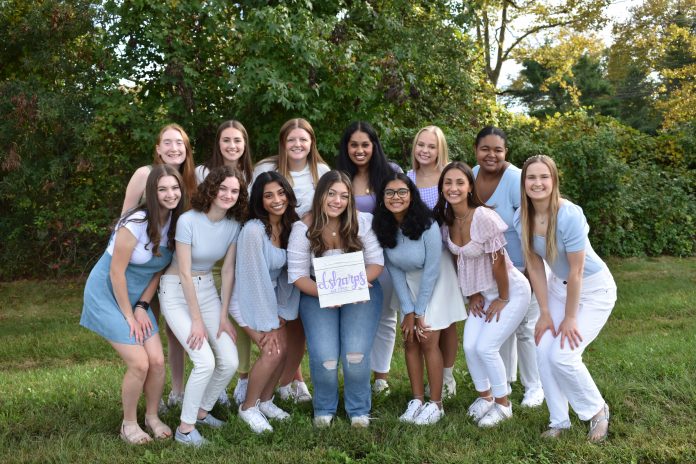 Although the multitude of acapella groups that are registered at the university often have their time to shine on campus, it is not too often that these groups have external gigs to show off their skills. This semester, the D Sharps are an exception. On Dec. 20 the D Sharps will be opening for the Rockettes at Radio City Music Hall in New York City as a part of the “Sounds of Christmas” program.

During the COVID-19 lockdown, when all Registered Student Organizations were forced to adapt and transition their activities to online formats, the D Sharps worked hard to uphold their group. They would practice their music on their own and submit recordings in order to maintain their musical skills. The group would also meet virtually every week to see each other and address any concerns. President of the D Sharps Kavya Beldona, a junior marketing major, expressed that keeping their vocal skills up involved “a lot of hard work on everybody’s part.”

“I think starting in an acapella group online was kind of weird because we didn’t actually put any music together until the end of last semester,” Ramachandra said. “We released a cover online of ‘lovely’ by Billie Eilish and we kind of had put that together by submitting individual recordings.”

As in-person activities have begun again, the group has gone back to their normal three weekly rehearsals and in-person acapella concerts. However, their performance at Radio City Music Hall has been in the works since March of 2021.

“We had a representative from Madison Square Garden reach out to our former music director just kind of asking whether we’d be interested in doing this performance, and it was at the end of last semester that we were kind of all asked about it,” Beldona said. “Everyone was like, ‘Yeah, like, of course we’d be interested.’”

The D Sharps were reached out to on behalf of the “Sounds of Christmas” program, which invites college acapella groups to perform a five-minute, holiday-themed set before the Rockettes perform their “Christmas Spectacular.” The D Sharps’ current music director, Hailey Benowitz, a senior early childhood education major, is arranging a five-minute medley that includes eight different Christmas songs with some classic and modern pieces.

“Anyone can kind of go on stage and just sing a bunch of Christmas songs that have been pre-arranged and purchased off websites and stuff, but, like, it would just be so cool to have an original piece,” Benowitz said. “And who knows who’s gonna come to that performance that night. They’re gonna remember us.”

The D Sharps have rehearsed for two and a half weeks for this performance just after completing their fall semester concert. Vice President of the group Cecilia Jozef, a junior nursing major, discussed how, because of the pandemic, the group had to learn a whole new repertoire this semester along with the Christmas medley for their Radio City set.

“Basically all of our members were new, except for three, and we have, like, about 16 girls in our group … commitment went drastically up [in-person], and everybody transitioned very well with that,” Jozef said. “Which is the reason we were able to even say yes to this gig, because, of course, we didn’t know at first — it was a big commitment. But everyone did very well … I’m very, very proud of them.”

The D Sharps are very excited for this opportunity and hope that this will get their name out there for future performance opportunities.

“We’re just, like, very honored for the opportunity,” Beldona said. “And it’s definitely going to be a great way to get our name out there a little bit, outside of UD’s campus.”