The galaxy has its eyes on you: E-52 performs “Star Wars”-“Hamilton” musical online 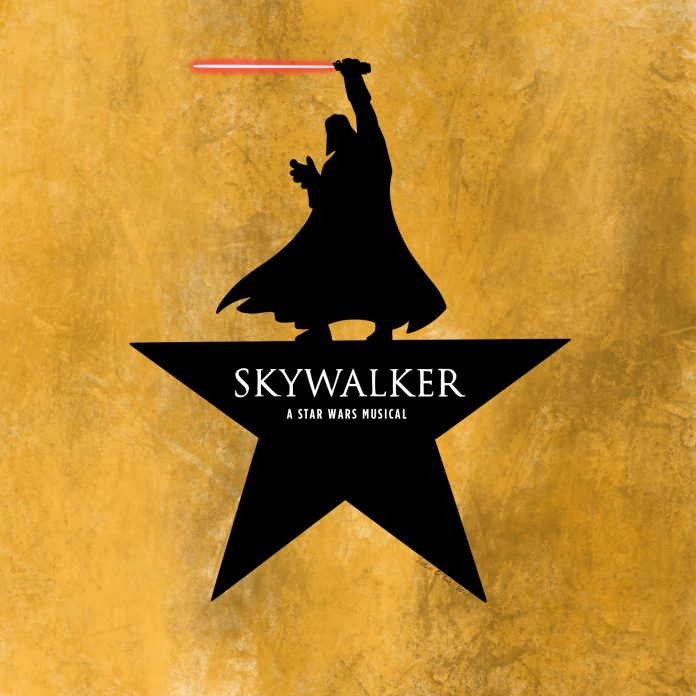 How does a rascal, orphan, son of a lone mom bondwoman dropped in the middle of a forgotten spot in the Outer Rim by providence, impoverished, in squalor grow up to lead the new Galactic Order?

This question, which has a familiar ring to it, is answered in E-52 Student Theatre’s audio production of “SKYWALKER: A Star Wars Musical,” and it’s coming to a galaxy near you.

Based on the story of the “Star Wars” prequel trilogy by George Lucas and the music of “Hamilton” by Lin-Manuel Miranda, “SKYWALKER” is a new pastiche musical series that tells the story of Anakin Skywalker’s rise and fall through the framework of re-lyricized and re-ordered “Hamilton” songs. Divided into eight 10 to 15 minute episodes, the musical is being produced remotely and released throughout the Spring 2021 semester.

A child of the Force, Anakin Skywalker grew up as a slave on the sand planet Tatooine before being discovered by Jedi Master Qui-Gon Jinn. Through the musical framework of “Hamilton,” we follow young Skywalker as he rises up through the Jedi ranks, squabbles with his superiors, enters a forbidden love with Padmé Amidala and finds Sheev Palpatine as a trusted confidant. Despite Skywalker being the Chosen One, who will bring balance to the Force, the “Hero with No Fear” descends into the dark side.

University student Frankie Scapoli, who plays the leading role of Skywalker, has some presence on almost every track. As a counterpart to the character of Alexander Hamilton, the major “Hamilton”-equivalent songs led by Skywalker include “My Shot,” “Helpless,” “The Room Where It Happens” and “Hurricane.”

Although Scapoli told “Centre Stage with Spinalzo,” E-52’s student-run podcast, that he had technical difficulties recording his voice when performing songs like “My Shot,” the musical has been enjoyable to work on.

“I’m liking what I’m doing and just watching it all come together, it’s great,” he says on the podcast.

It was in early, pre-pandemic 2020 when senior neuroscience and biology major Eric Brengel and Adam Wang, a student at Cornell University, wrote the first lyrics of “SKYWALKER.” While the idea for a “Star Wars”-“Hamilton” musical had Wookiee-sized potential, it remained dormant until a year later.

“[Adam and I] never thought there would be any kind of opportunity to make anything of it,” Brengel, the co-creator and director, says. “Then this [past] winter we wrote a couple songs and realized there’s so much potential here, and that this definitely is more than just an interesting shower thought.”

Once the writing process began, Brengel and Wang turned their idea into a passion project by writing and editing the script “nonstop” and pitching a draft to E-52 in hopes of making it more than just a hypothetical idea.

Wang, who is also a co-creator and works on the visual aspect of the production, says that the goal in writing “SKYWALKER” was to remain faithful to the storyline of both works.

“The idea was to make things sound as similar to the original as possible but completely changing the meaning or words,” he says. “Like changing [the lyrics of] guns and ships to clones and ships, which sounds pretty similar but also implies something entirely different.”

Coming up with character arcs from “Star Wars” that would fit the script of “Hamilton” was challenging but satisfying when it was all figured out, according to Brengel.

“It’s definitely fun figuring out what elements of each character are going to translate into,” he says.

For example, “Dear Little Ani” is a song from Episode II and an impression of “Hamilton’s” “Dear Theodosia.” Performed by John Demko, Hannah Grube and Heidi Fligelman, a dying Qui-Gon Jinn and a distant Shmi Skywalker sing of their hopes for Skywalker. Obi-Wan Kenobi is instructed to train him.

“I’m super proud of how the cast performed that song,” Brengel says. “I think that’s possibly one of my favorite moments as well, at least so far.”

Without straying too far from the grim interpretation “Star Wars” has within the framework of “Hamilton,” the musical remains to be lighthearted in nature.

“It is said that all great art is optimistic about human nature,” Wang says. “This musical might actually be a pretty poignant exemplification of that phrase.”

While all of E-52’s performances have been entirely virtual this past year, dividing “SKYWALKER” into an eight-part web series (rather than a two-hour long performance) has allowed the creators and cast to have more creative freedom.

“It’s definitely the most digestible way to appreciate it and so that people can get involved along the way,” he says.

Each week, the cast of “SKYWALKER” comes together for Zoom rehearsals, and every cast member then records themselves individually and sends their recordings to Brengel to be produced. For him, working with the cast, who come from all walks of life, has been a rewarding experience.

“Everyone’s really gotten into it and had their own opportunities to make their own mark on it,” Brengel says. “The cast really just kind of brought our lyrics to life in a way that I don’t think I was prepared for, and how rewarding, how special that was going to feel to really see it coming together and to see so many other people get involved with it too.”

Having an out-of-this-world cast, along with a unique iteration of the “Star Wars” trilogies, is unlike anything that Brengel and Wang could have expected.

“It’s turning out miles better than what we ever originally imagined,” Brengel says. “Now that we have this, it’s kind of a dream.”