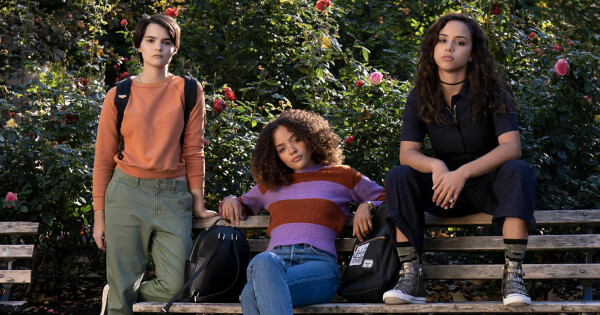 Courtesy of Netflix/THE REVIEW
“Trinkets” follows three different high schoolers who all have one thing in common: shoplifting.

Adapted from the book by Kirsten Smith, “Trinkets,” now a popular Netflix Original series has come out with a second season, which was released on September 25th.

“Trinkets” follows three different high schoolers who all have one thing in common:shoplifting.

Elodie, who recently lost her mother and moved in with her dad, stepmom and stepbrother, is required to go to Shoplifters Anonymous, where she meets Tabitha and Moe. Tabitha, the “popular girl” amongst her peers, deals with her abusive boyfriend throughout the first season. Moe also deals with romantic troubles as she is secretly hooking up with a popular soccer player at her school, but desperate to keep her identity as an apathetic burnout.

Through Shoplifters Anonymous, the girls grow closer and closer. We watch them as they start to become who they want to be. The first season of “Trinkets” features the creation of a close bond between these characters.

However, the season ends on a tense note, as all three of them could possibly get caught for sinking Tabitha’s ex-boyfriend’s car in a lake. With police sirens playing in the final moments of the season finale, we are left with a feeling of uncertainty about how the trio will turn out.

Don’t worry; there’s no second season spoilers ahead, but know that it is definitely worth the watch.

Along with a realistic and interesting story for our protagonists, the show also takes great care to provide a diverse cast with diverse storylines. Kiana Madeira and Quintessa Swindell, who play Moe and Tabitha respectively, are both women of color. Additionally, throughout the show their characters articulate their experiences on being women of color. In season two especially, Tabitha deals with racist microaggressions from sales associates and struggles with her relationship to her hair and how she styles it.

Brianna Hildebrand, who plays Elodie, provides representation for the LGBTQ+ community. In “Trinkets”, Elodie comes out to her friends early on in the first season, admitting to them that she likes girls. In real life, Hildebrand is bisexual.

Oftentimes shows or films will cast straight people to play LGBTQ+ roles, such as Nick Robinson’s role as Simon in “Love, Simon” or Eric Stonestreet’s role as Cameron in “Modern Family.” However, this usually receives backlash and is considered offensive to LGBTQ+ individuals. So when casting directors make an effort to cast LGBTQ+ individuals in LGBTQ+ roles, it is greatly appreciated and important for representation.

“Trinkets” also features numerous other side characters who are people of color or LGBTQ+ individuals, showing that a show can have diversity and be entertaining.

Furthermore, the issues presented in the show provide an accurate portrayal of typically stigmatized issues such as relationship abuse and addiction. Tabitha’s boyfriend Brady exhibits abusive behavior that Tabitha struggles with being a victim of. She is often told that her and Brady are a perfect couple, which is a great depiction of how abusive situations can look normal to outsiders.

Elodie’s shoplifting addiction is portrayed in a realistic way, as her recovery is not consistent. She has good days and bad days, she struggles and overcomes it. The relationships in her life are damaged by her addiction but eventually strengthened again when she reaches out and is honest about her problem.

Unfortunately, the recently released season was announced to be the final season of the show. Since the series is based off of a book, there is only so much content they can create before the show comes to its natural end.

However, the show’s fans can take comfort in the unbreakable bond of these characters. “Trinkets” is a show that celebrates unlikely friendships and reminds you nothing is worth more than finding the people who get you. As Elodie says:

“What if you meet people who, without even trying, just see you? What if the people you least expect turn out to be your people. If you let them.”