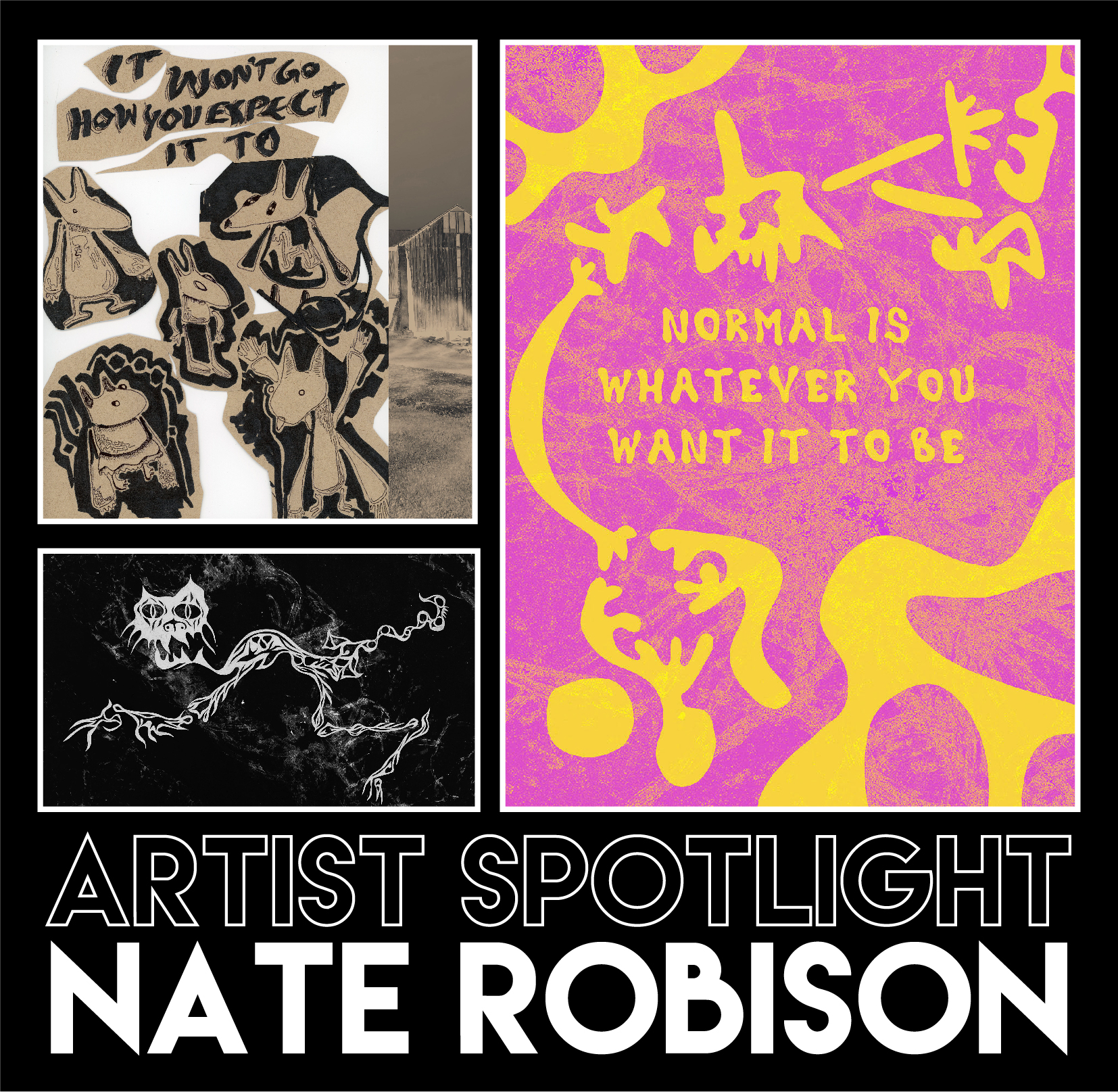 Nate Robison,  senior fine arts major and disability studies minor, used to go with his mom to old hotels and watch her do stencil work on the walls for her job. Now he’s working towards his own designs being out in the community.

Robison learned a lot from his parents, his mom doing a bunch of little jobs to foster her creativity, while his dad, an engineer, was all about “solving problems in a procedural way,” Robison says. “Through their different kinds of support, I picked up a lot from both of them.”

Robison really started fostering his own creativity beyond elementary doodling when he went to middle school. He went to Cab Calloway School of the Arts in Wilmington, where every student has a “major,” his being visual art. However, creating as a middle schooler and actually seeing yourself as an artist are two very different things.

“When you’re in middle school and have to do art for a project,” Robison  says, “You don’t really do it for fun, and I don’t think I remembered how to do art for fun like I did when I was little until I was in college.”

Robison deals with Attention-Deficit/Hyperactivity Disorder (ADHD) as well, which he says impacted his creativity and his perception of art.

“You have to be conscious in the way that you approach your own brain, and you have to be very honest with yourself with what your brain likes and what it doesn’t like and what environment it works best in; and give yourself what you need whenever you need it at whatever point in your life,” Robison  says. “I took AP Studio my senior year at Cab, and I think that was the turning point of like, ‘Oh I like this. This is how my brain works.’”

Robison didn’t see himself as an artist until he came to college. A huge part of that has been his relationships with the professors in the art department.

“I could literally pick a professor’s name out of a hat and tell you the revelation I had while talking to them,” Robison says. “Overall, a big thing is how useful a relationship with a professor can be if you just talk to them.”

“They just start telling you about artists to look at,” Robison says. “Every single one of them has said, ‘hey, you’re doing this one thing that’s interesting, you need to look at this artist who, twenty years ago, did a similar thing, but it was informed by this political movement.’ The amount of rabbit holes I’ve been able to go down is so, so cool.”

Finding those “rabbit holes,” Robison says, impacts so many different aspects of the creative process and your journey as an artist. This is also a major part of being a Fine Arts major where you have to be proactive enough to find and utilize the resources that you need.

Ian Sampson, another professor Robison cites as an inspiration, was the professor of Robison’s first class at UD. Sampson taught Robison in “Core: Design” and “Interactive Media”. The best artistic advice that Robison has received came from Sampson when he said, “kill your darlings.” This is the idea that the stuff you make is not you, and it is only a part of the process to get you to reach where you need to be.

“While you’re alive, you don’t have time to get attached to your work,” Robison says. “Everything you do matters a lot, but every single decision you make doesn’t matter at all.”

A big decision for Robison came in his sophomore year, as it does for all art majors. In the art program, you start out as just an art major before choosing between Visual Communications (VC) and Fine Arts in your junior year. When you’re in “Core: Review,” you are deciding what path you should take. You bring a portfolio of everything of note that you’ve made and sit in front of a panel of professors who critique your work.

“It’s a lot less terrifying than it sounds,” Robison says. “They just review your body of work, give you their impressions of it and give you suggestions. You say what you want to do, and they give a vote on it.”

Nate originally thought he wanted to do VC, but after receiving some advice from friends and then from the professors during his review, he decided that that wasn’t where he would thrive the most and went forward as a Fine Arts major.

“They convinced me in the meeting to do fine art, and I’m so glad they did,” Robison says. “Doing fine art has given me complete control over what I want to do.”

Robison’s art crosses many mediums. He leans more towards projects where he has the most options available; he doesn’t stick to a specific medium. He approaches digital art with a sculptural perspective and tries to have whatever holds his attention exist together in a single digital file.

“What I spend a lot of time doing is collecting objects or doing little drawings or taking photos and taking them all together, making little sculptures out of them and putting them in a scanner,” he describes.

During a conversation with another professor, Aaron Terry, Robison honed in on what he enjoys artistically.

“The conclusion that I came to for myself is that the main thing that I like to do is find some system or some program or some machine or some phenomenon, and find some natural process that occurs and disrupt it,” Robison says.

Another part of his education that became a big part of his identity is his minor, Disability Studies. Beginning in his sophomore year, Robison has been working at the STAR Campus in the Innovation Lab with Martha Hall.

His work concerns research with adaptive clothing and functional design. Robison says he wants to make interchangeable prosthetic plates where a child can put their own designs on a prosthetic limb, instead of it being a long process involving lots of doctors and other authority figures. The child can make the decision on a whim about what they want that day and apply it.

“I want to make that into a career,” Robison says. “I want to take what I learned in art school… I want the end point to be the community and people’s day-to-day experience.”

A large part of his project centered around what he calls “Design Advocacy.” He wants to be an advocate within the disability community through his design work, as he feels companies are often more concerned with making money and doing good business than the actual experience of the consumer. While he doesn’t believe any of it is through bad intentions, Robison feels that the right people aren’t being utilized for the designs. He says that health and wellness, as well as design, are all deeply emotional, and conscious design may influence someone’s well-being and perspective.

“When you give something to someone that was designed by a team of engineers, it reinforces the idea that something doesn’t work,” Robison says. “You’re reinforcing a lot when making something invisible or industrial-looking. Things don’t have to be sterile and medical. They can be organic and pretty.”

He does note, however, that these companies are starting to realize that the more fields that are consulted for these products, the better they will be.

During the COVID-19 pandemic, he has changed his idea that art was a box to check off on a to-do list to the idea that “everything you do can be art.” He says that quarantine affected everything for him. Other people are an artist’s frame of reference, so when the pandemic took that away, it became about strengthening his own frame of reference in his head. It shifted his perspective on his artistic process and gave him a new outlook more about accepting moments of creativity that come and focusing on other aspects of your life when they aren’t there, like feeding yourself, he says. Creativity can’t be forced.

“When I adopted that mentality, I started feeling more creative everywhere,” Robison says. “It hasn’t sped up my production of art at all, but it has made it a lot easier to accept those moments of creativity when they come because I’m not trying to force them to come.”

His Instagram account, @glowbonez, became a large part of this creativity. He likes to see the phases he went through artistically, and it has become a huge motivator for him. He sees the account as an end place for his work and, upon reaching a stopping point in a piece, has him ask himself, “are you comfortable enough with this being seen?” He says that the account and seeing his work on his Instagram grid also helps him move forward with projects.

“I really just use it as a tool for myself to zoom out and move ahead and not get bogged down,” he says. “There’s a quote by someone that’s something like ‘a painting is never done,’ ‘the painting doesn’t finish when you put your brush down’ and that’s all true, but sometimes you just need to start something new; and you just need to will yourself into letting something be done. You can obsess over details forever, but there’s the finality of ‘okay, here it is. It exists in this grid. New idea.’”

In the future, he sees himself potentially utilizing social media more for the networking and monetary benefits, but for now, he sees it as a little “island” for his work.

After graduation, Robison intends to continue his prosthetic design research and start a larger scale project for his prosthetic work in a Masters program in Apparel Studies. He feels that the academic path up until this point has been to learn a lot and do a lot, but going forward, he wants to learn how to broaden his reach and design on a larger scale, as well as learn more about the business aspect.

“We always talk about how ‘oh, education is a bubble,’ but I feel like no matter where you are, you’re always going to be in some kind of bubble,” Robison says. “I feel like, to some degree, getting experiences is about continually popping that bubble and giving yourself the resources to be like, ‘I may not always know what I’m doing, but I am going to know that I’ll figure it out.’ I think me going to grad school is the grudging acceptance that I need to leave my bubble.”

Whether you like it or not, the bubbles are going to pop, so it’s all about how well you prepare yourself to hit the ground running each time it does.