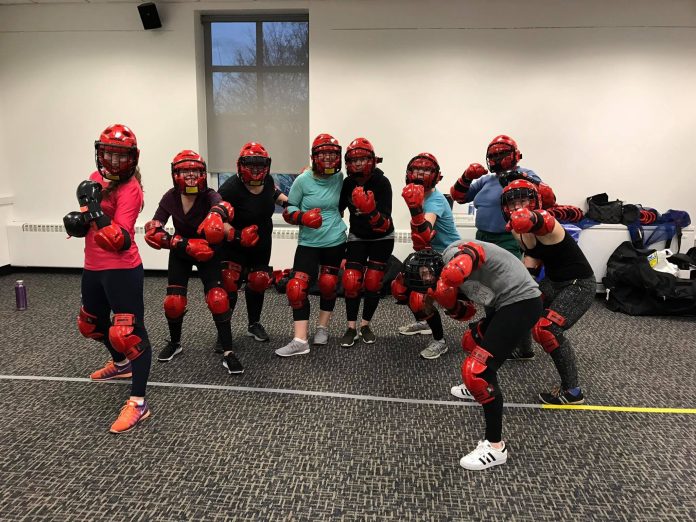 Throughout the month of April, the University of Delaware Police Department (UDPD) hosted their Rape Aggression Defense (RAD) self-defense classes for female students, faculty and alumni. This year’s classes took place on April 5, 12, 19 and 26.

The classes were taught by UDPD officers certified by the RAD Systems — an organization that aims to create a safer future by teaching self-defense.

Corporal Alaina Battle, who has been with the UDPD for 13 years, said that they have been hosting RAD self-defense classes since before she joined.

“Our officers go through [RAD’s] program,” Battle said. “We’re taught how to do all the moves and how to teach everything specifically to how they have created their program, and then we are certified under them.”

RAD certification consists of a one-week training course where officers learn how to teach the information, perfect all the moves and show someone how to do them. Battle has been certified in RAD for seven years.

“You have to want to do it,” Battle said. “You have to put a lot of time into teaching the classes and making sure your certification is up to date and everything. As of right now, we only have eight officers who are trained.”

Each class consisted of 10 to 15 female students and up to four or five officers, depending on the number of students in the class.

“A lot of it is different strikes — so how to properly throw a punch, a lot of kicking strikes [and] elbow strikes,” Battle said. “It’s really just showing people how to do the proper form. And then we have the bags and actually let them hit [them], and they can perfect the way they do it.”

The classes were held one night a week for four weeks, but in the past, they have taken place two nights a week for two weeks.

“Each week, we review what we did the week before, and then we teach different moves each week,” Battle said. “The fourth week, we have scenario-based [training]. So, our male officers dress up in RedMan suits, so it’s all padding and everything, and then the females get to use all the moves that they’ve learned.”

This year’s classes took place in person, and students were required to wear face masks as well as show their daily symptom check results. UDPD also hosted the class virtually due to the pandemic.

“We kind of just did an overview of safety tips and information that we typically share with our students,” Battle said. “And then we demonstrated through Zoom some of the moves that we teach our students.”

Apart from learning physical self-defense, Battle said one of the most important things women can do to stay safe is be aware of their surroundings.

“A lot of times, people are looking at their cell phones or not really paying attention,” Battle said. “Knowing what’s going on around you is probably the most important safety tip we tell people all the time.”

As far as rape prevention, Battle said that the university’s Sexual Offense Support provides a lot of information about consent and sexual assault. The UDPD, however, does not offer classes relating to these subjects.

UDPD also does not offer a similar self-defense class for men, as that requires a different certification under RAD.

“Right now, we don’t have any officers that are trained to teach the male self-defense under the RAD umbrella,” Battle said. “But if we had males that wanted to have a safety presentation, we could show them some of the same self-defense moves. We wouldn’t be against doing that.”

Regardless, Battle said that the male RAD self-defense class would probably not be too different from the female one.

“Basically, the RAD [female] class is all about how to keep yourself from being abducted and ways to get away,” Battle said. “We’re not teaching people, ‘Somebody’s trying to sexually assault you; now here’s a way to beat them down.’ It’s mostly just, ‘These are the moves to help you create distance and get away.’ So if a male wanted the same type of training, it would be pretty much the same thing.”

RAD programs are available worldwide, and once students take the course, they can go anywhere in the world and take it again for free.

“We offer it for free anyway,” Battle said. “We sometimes let different people throughout the community attend, but we give the spots to our students first.”

As one of the instructors of the course, Battle said she thinks that self-defense is an important skill for women to have.

“It helps [women] protect themselves,” Battle said. “You never know when you’re gonna be involved in any type of situation [where] either someone’s trying to sexually assault you, abduct you, or even just trying to [rob you]. I have three daughters, and I teach them this stuff all the time. They’re not anywhere close to college age, but I think anything that can help [you] protect yourself is important to know.”