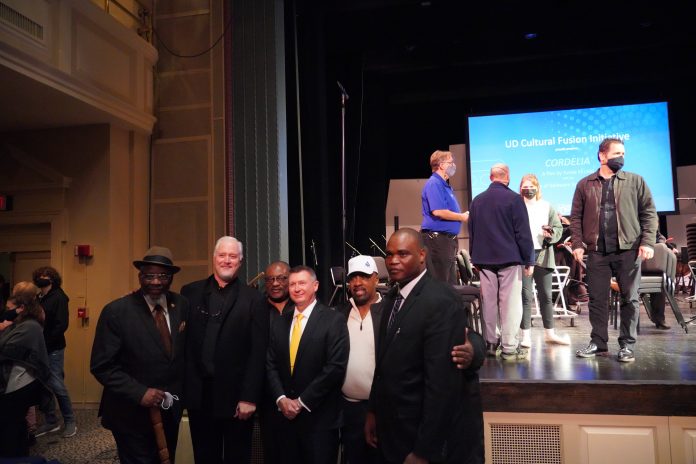 On Nov. 5 at 8 p.m. the university’s symphony orchestra performed the live soundtrack for the world premiere of the film “Cordelia” in Mitchell Hall. James Anderson, director of the orchestral activities and the university’s Cultural Fusion Initiative, led the project. The film was created by Tunde Kelani, a well-known Nigerian filmmaker.

The buildup for this event has been years in the making, starting with Anderson’s initial intention to take the orchestra across the globe.

“I had this vision of taking the orchestra to all seven continents, and Antarctica’s the hard one, but Africa was the next on our list, so I started looking for collaborations in Africa and [found] this particular project,” Anderson said.

So far, the orchestra has already traveled to four continents. Anderson’s lack of knowledge about Nigerian culture is what spurred his interest in learning about and traveling to Nigeria.

“I was speaking to Senator Chris Coons, who has a great love for Africa and who sponsors the conference called ‘Opportunity: Africa’ with the [U.S. Global Leadership Coalition,]” Anderson said. “He invited me to this conference, and that’s where I met a delegate from Nigeria, and that’s what started this project, and his name is Wale Adelagunja.”

After meeting Adelagunja, Anderson spent two weeks in Nigeria in 2018, traveling around the country and speaking with locals about his initiative and the idea of combining Western classical music with traditional Nigerian music. He had the chance to meet with Kelani, and they discussed the idea of traveling around the world with students from Nigeria and the United States. Kelani said that this idea would be a perfect topic for a documentary, and Anderson asked Kelani if he would be interested in doing some filming for the documentary.

“I told Mr. Kelani, ‘If you can provide me with one of your films and extract the music from the film, I will show it on the campus, and my orchestra will play a live version of the soundtrack,’” Anderson said. “He gave us a great honor. He said, ‘I’m going to do one better. I’m going to provide you with my newest film. You can have the world premiere of it, and your orchestra can play for it.’”

From Anderson’s interactions with Kelani and Adelagunja, he was able to bring the world premiere of “Cordelia” to the university’s campus. Those involved in the project included the university’s orchestra of about 75 musicians, a team of transcribers and orchestrators working on the film score and student composers, including junior Leia Sofia Mendez, who arranged two Nigerian songs that were featured in the end credits of the film.

The project would not have launched in the first place if it wasn’t for the dedicated students in the orchestra.

“I was introduced to the Cultural Infusion Initiative project through Dr. Anderson … I play tuba in the ensemble,” Mikayla Vangelo, orchestra president and first year graduate student pursuing a master’s degree in teaching and performance, said. “As a player, my main job is to play with passion, precision and purpose — our orchestra motto. I have to immerse myself fully into the musical experiences and be willing to be a part of the bigger picture.”

The main purpose of the orchestra was to enhance the film and provide a fusion between two different cultures.

“Personally, I felt a level of excitement that is unexplainable to be a part of something so unique, so genuine,” Vangelo said. “We were able to form such genuine connections not only with one another, but [with] everyone involved in this project.”

That level of excitement was not only present in the performing artists but also among the 415 audience members who attended the premiere. Mitchell Hall was filled with students, families and other attendees eagerly waiting to see “Cordelia.” Audience members chatted among themselves, made jokes along with the film and let out gasps of surprise as events unfolded.

The film itself had elements of suspense and action as it took the audience through a coup in Nigeria. The film also possessed a great deal of comedic relief and filled Mitchell Hall with roars of laughter.

The film is estimated to be seen by tens of millions of people, not just university students.

However, the initiative is far from over, and Anderson still has big plans for the orchestra.

“My source of inspiration for [the Cultural Fusion Initiative] really comes down to Fela Kuti who was the inventor of [Afrobeat],” Anderson said. “What he did was he took the best of jazz, reggae, rock and roll and jùjú and … fused them into its own recognizable style of music.”

Anderson and Femi Kuti, a Nigerian musician and Fela Kutis’ son, have been in discussion about partnering the university orchestra with some students from Nigerian orchestras to back up Kuti’s band.

“That’s kind of the crowning jewel of this Cultural Fusion Initiative project, and that, we’re thinking, is going to take place in the summer of 2023,” Anderson said.