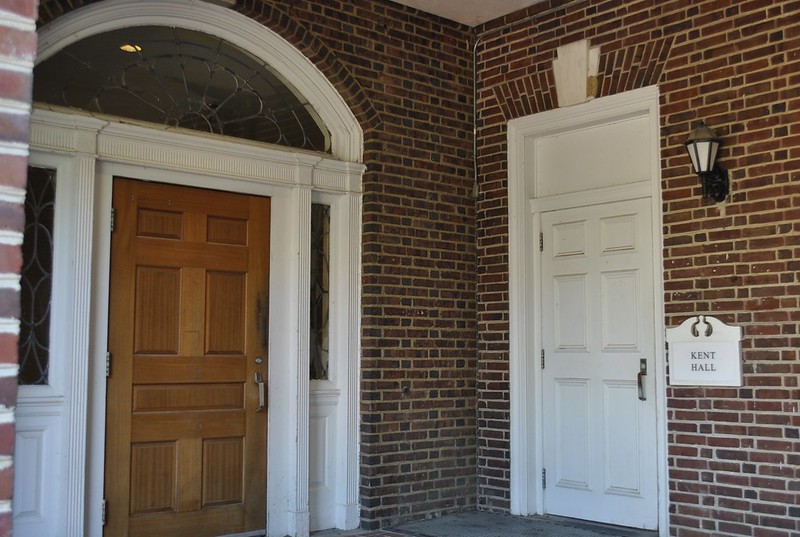 EVE LOMBARDI/THE REVIEW
Kent has been scheduled to temporarily reopen its doors for anywhere between six to nine months in place of Russell Dining Hall, which will be undergoing major construction.

The now-closed Kent Dining Hall has long been said to provide what’s been described as a more “intimate dining setting” when compared against other campus dining halls. With chandeliers lining the ceiling and round wooden tables decorating the tiled floors, Kent’s time-honored rustic aesthetic is what has made Kent a special spot on campus for students over the years.

As one of the university’s most landmark buildings, Kent was built in 1925 and has served foremost as a meeting ground and subsequently as a dining hall for generations of Delaware students.

“My parents used to eat at Kent when they went to school here,” sophomore Erin Ryan said.

The future plans for Kent, however, remain largely undetermined as administrators continue to deliberate over how to best address the university’s most pressing needs.

With the recent addition of the Caesar Rodney Complex only a few steps away from Kent, the Project Planning and Delivery team in conjunction with the Facilities Department continue to weigh the alternatives for repurposing the facility in a manner that agrees with the university’s strategic plan.

In addition to the recent closures of both the John Dickinson and Caesar Rodney Residence Halls on West Campus last May, the augmenting student population has made the importance of campus planning initiatives and their role in accommodating student demands even more critical.

Peter Krawchyk, university architect and campus planner, shared that “there are no definite future construction plans for Kent Dining Hall” as of yet. The building’s usage down the road will be discussed in October when the university’s Space Committee meets to piece together a resolution.

Within a year’s time, however, Kent has been scheduled to temporarily reopen its doors for anywhere between six to nine months in place of Russell Dining Hall, which will be undergoing major renovations.

While details about the changes to Russell remain unclear, $2.7 million has been earmarked for its construction, Alan Brangman, vice president of facilities, real estate and auxiliary services, said.

“We are still performing an assessment on the utilization of this new project, which will determine how the money is going to be spent,” Brangman said. “The current plan is to open the renovated Russell Dining Hall at the same time as a new residence hall in the fall of 2017 and Kent will likely close when Russell reopens.”

Brangman said the future of the Kent facility is still up for debate. There has been discussion from Student Services to utilize the building as a long-term space for first-year students. Additionally, there has been an interest from the Office of the Provost to use Kent as a special event facility.

“It has a great atmosphere for a dining experience,” Brangman said.

“Once we elect a new president, we will look to hire new planners and consultants to craft a new master plan to help sort the school’s athletic and academic needs,” Brangman said. “We haven’t had one in over 30 years.”

Brangman said through this comprehensive plan, the administration will then be better equipped to confront the challenge of acquiring a firm grasp on student needs, whether that be in the shape of research facilities, classroom space or new residence halls.

“All will be taken into consideration in order to determine how large of a university we want or need to be,” Brangman said.

As the Project Planning and Delivery staff members continue to hone in on a decision, students are eager to find out what the administration will dish out with Kent.

“I’d like to see Kent being used as a study space for students,” sophomore Sara Downie said. “Sometimes students need a place to go in between classes during those awkward breaks. More so than a dining hall, that’s what Kent was for me.”