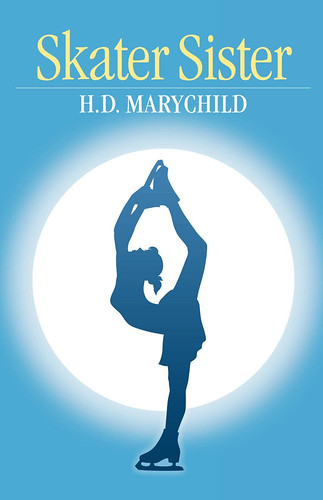 Courtesy of amazon.com/THE REVIEW
Wilmington native H.D. Marychild writes about her love of the Olympics and figure skating in her new young adult novel, “Skater Sister.”

Wilmington native H.D. Marychild’s book “Skater Sister,” was released right on time for the Sochi Olympics this January. The young adult novel tells the story of two sisters, one of which is an Olympic contestant and the other who lives in her shadow, she says. The book, as demonstrated from the title, is told from the perspective of the sister, Karen Fenstermacher.

Marychild says she always enjoyed watching the Winter Olympics over the Summer Olympics, for the sheer speed that the athletes would fly with in most of the events. For her, figure skating was the most thrilling event, a combination of athletics and art that to her looked like ballet on ice, she says.

After watching the figure skating at the Vancouver Winter Olympics, Marychild says she realized it would make a great backstory for a book about figure skating.

“The book’s schedule is based on Vancouver’s Winter Games because there was rumored to be a big rule change in figure skating, where a single skater could use a song with words,” Marychild says. “No website could confirm when this would happen, so I figured it was now-or-never to write out the book idea I’d had.”

Despite this, the book began to hold a lot of similarities with the Sochi Olympics when it came to the skater character.

“When I started writing this book, Natalie [the Olympic skater in the book] wasn’t based off of any skaters in particular,” Marychild says. “However, as I wrote the book, there grew to be a stronger and stronger correlation between Natalie and real-life figure skater Ashley Wagner. Both of them had blonde hair, skated to the song ‘Romeo and Juliet’ by Prokofiev and earned 4th place in their events.”

Marychild herself never figure skated but loved watching it and saw Karen, the sister, as a role model anyone could relate to, she says.

“Karen feels like she falls under the shadow of her older sister,” Marychild says. “The book is about being appreciated even when we don’t think we are.”

The book features an account of figure skating that is both explanatory and non-technical.

“The book was my valentine to figure skating, but I tried not to make it too technical,” Marychild says.

One of the essential elements of writing is to touch people and have them experience emotion, she says, so she wanted the novel to be accessible to anybody regardless of their knowledge of the sport.

The theme of sibling rivalry can be a strong part of any young adult novel.

William Lewis, assistant professor of literacy education at the university, stated in an email message that while sibling rivalry can be common among young adult books, strong sibling connections can allow the protagonist to overcome any opposition or adversary. By using the young adult book, Lewis says it’s easier for the reader to go back to that time of doubt and insecurity to remember how to overcome that feeling.

“I think that a theme that cuts across many of these texts is the search for identity and connection,” Lewis says. “The situations in most YA (young adult) books […] realistic or fantastical […] force the characters to ask questions about who they are, who they are becoming, what is most important to them and the critical importance of connecting to someone who shares their outlook.”

Marychild says she chose to publish the book independently under the name “Small Wonder” with her pen name. As an academic writer, she says she typically writes a manuscript, sends it to her publisher and it’s published in about one year.

“Publishing from a university press is very different from independent publishing,” Oestrich says.

Indeed, the choice for publishing is extremely important for the author. Marychild says if she had opted for the “Big Six”—the six big publishing houses for fiction: Hachette, Macmillan, Penguin Group, HarperCollins, Random House and Simon & Schuster—it would have taken her novel about two years to come out, well after the Winter Olympics at Sochi.

Therefore, Marychild says she opted to work on the book entirely by herself. That meant choosing every single detail for the book including font, size, title page and cover art. While she did enjoy being able to control every aspect of the book, Marychild says generating publicity was the hardest part.

Marychild says she wrote the book without telling anybody. She described her writing process with the German phrase “sitzfleisch”—which in English means “sit your butt down.”

Every day, Marychild says she would write two to three pages longhand in her notebook for the story. She was meticulous about the plot of the book, going back and reworking it, so that every part of it was significant. She says her academic research helped her with the process of reflecting and making sure it was perfect, and some of the best compliments she’s heard from the story orbited around the intricate plot she’s crafted.