Women’s lacrosse gets back on the field for first time in 11 months, falls to Temple 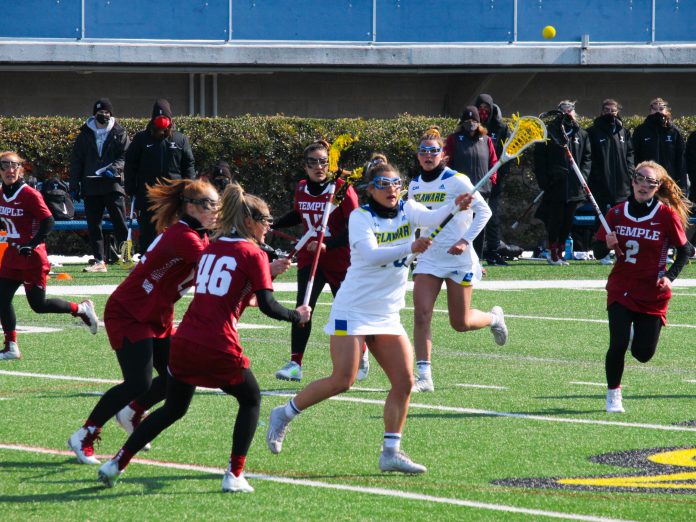 The last time Delaware Stadium saw any game action on its field came in a 12-11 double overtime thriller as the women’s lacrosse team defeated Elon.

Fast forward just under a full year, that same women’s lacrosse team gave Tubby Raymond field its first taste of sports. The outcome did not turn out the same however, with the Blue Hens losing to the American Athletic Conference’s Temple Owls 17-10.

Delaware Head Coach Amy Altig gave credit to her team in its ability to do all the necessary steps in order to ensure her team’s ability to play in a game once again. The second-year head coach said heading into the game the emotion level was high with it being almost a year since they last played in a live game.

“I think the opportunity we have to be here is because our young women did everything they were supposed to do,” Altig said. “I think we’re all just feeling really grateful and thankful for the opportunity to be taking the field.”

Senior Captain Kate Bradford also described the team’s energy before the game as “definitely good.” Bradford spoke on the team’s mindset for this season, with it centering around making each moment count.

“We definitely are talking about this year as cherishing every moment and making sure we make those moments count,” Bradford said. “I think we had glimpses of that [today] but not as a whole.”

A total of 57 spectators were in attendance for the team’s home opener, all of which were family and friends of the athletes. Altig said that little feeling of a pre-pandemic game day normalcy with having family and friends in the stands adds to her team’s gratefulness.

Bradford’s parents and brother were three of the 57 in attendance. Bradford said the support from her and her teammates family’s meant a lot to them. Bradford is looking forward to her and her team’s next home game on Feb. 24 against Delaware State.

“We definitely want to come out on Wednesday hard for our families again and for ourselves,” Bradford said.

The loss for Delaware came on an afternoon where Temple went on multiple scoring runs in the first and second half. Temple scored six unanswered goals in the first and mimicked that at the start of the second, connecting on five straight goals.

In the last 15 minutes of the second half, Delaware outscored Temple 5-2 including a streak of three goals starting with just over six minutes remaining in the game. Altig believes her team’s offense showed its ability to score in those minutes and is something they can build off heading into Wednesday.

Similarly, Bradford views the end of a game as a way of the team coming together. She sees the teams three day break prior to the matchup with Delaware State as a way to work on connecting with more passes on offense.

Delaware’s head coach expects Delaware State to play aggressively, similar to Temple. Delaware finished the game with a total of 16 turnovers. Altig believes that limiting these turnovers will allow the offense that she saw glimpses of against Temple to come to furison.

“I think our offense showed that they’re potent, they can score when given the opportunity,” Altig said. “I think we have to do a better job as a team possessing the ball and getting it to our attack and giving our attack a chance to show what they can do.”

The Blue Hens lost multiple women after the 2020 season got cut short. According to Altig, her roster consists of a lot of young players that were unable to get much game experience last year due to the season being cut short. As the season picks up she expects her team to get into more of a rhythm as these younger players get more playing time.

“I think it’s going to be the ups and downs at the beginning until we can kind of start getting into that flow,” Altig said. “I thought there were some really great bright spots today that we can really capitalize on going into Wednesday.”

In the CAA preseason poll, the Blue Hens were picked to finish behind Hofstra, Towson and Drexel in the Northern division of the conference.