Men’s Basketball Season Preview: Can Allen and Anderson take over as the post-Daly era begins? 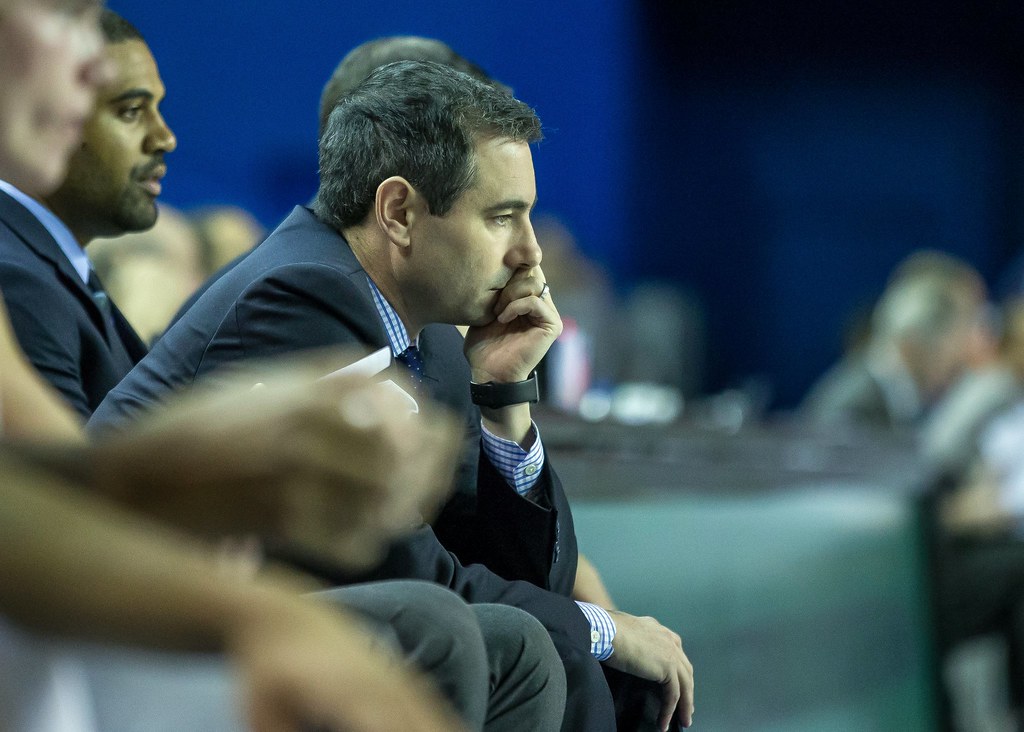 It’s time for year three of the Martin Ingelsby era.

In the 2017-2018 season, Delaware improved by one win both overall and in CAA play (14-19, 6-12). For the second straight season, Delaware was bounced from the CAA tournament after two games.

The Blue Hens have not had a winning record since their NCAA tournament run in 2014.

“You want the instant gratification right away of winning games, but I think looking back on it, I understand it’s a process and we need to really lay a strong foundation of who we are as a basketball program and I think each year we’ve made progress,” Ingelsby told me on WVUD’s Blue Hen Sports Cage.

Here is a breakdown of what to expect from the Blue Hens this season ahead of their first matchup at Maryland on Tuesday, November 6.

Key Losses: The departure of Ryan Daly will be one of the top storylines surrounding this Blue Hens team at the beginning of the season.

How does a team move forward when its best player decides to leave? What does Daly’s departure say about the program? How far does it set the Blue Hens back?

The most important of those three questions might be the last one. And to those answer-seekers, I’d say not much.

On paper, it seems like a devastating loss. Daly led the Blue Hens in scoring in each of his two seasons, finishing his Delaware career with exactly 1,000 points (Daly is the third Delaware player ever to reach the 1,000 point milestone in his first two seasons). He led the team with 6.9 rebounds per game across the last two years.

But Daly never possessed the elite athleticism that Kyle Anderson and Ryan Allen have displayed in their short tenures at Delaware. Anderson and Allen have the potential to surpass Daly’s abilities and to become more well-rounded offensive threats. Will they do that? Only time will tell.

Daly’s game, scrapping for loose balls and rebounds, hitting contested threes and barreling through the paint for layups, works better when he’s a team’s second or third option. Unless Daly significantly elevated his game, Delaware wasn’t going to win the CAA with him as their top guy.

Commentary: Should Daly be celebrated or cursed?

That said, he’s a huge loss in the immediate future. Daly had only missed six games in the previous two seasons. The Blue Hens went 1-5 in those games, only defeating Bryn Athyn in 2016, a Division III team. The five losses were all in CAA play.

Ingelsby rarely felt comfortable enough with the rest of the team to sit Daly for more than a few minutes, playing him a team-high 37.5 minutes per game, the second most in the CAA behind Hofstra’s Justin Wright-Foreman (37.8 per game). Though not the most efficient scorer, Daly was their bucket-getter, the guy who gets the ball when everything else isn’t working and the team needs scoring.

He more often than not delivered and showed up in the postseason. The energy he brought to each game was unparalleled.

“We moved on pretty quickly honestly,” Ingelsby said of Daly’s departure. “…We’re disappointed that he left, but I think we learned if he didn’t want to be here, we’re going to move on.”

The team will also lose Anthony Mosley and Skye Johnson to graduation. Despite Mosley’s shortcomings, most notably a nonexistent three-point shot, he was a minutes eater that will be difficult to replace.

From 2015-2018 Mosley started 85 of the 95 games he played in and averaged 31.2 minutes per game. That’s the most by any Delaware player in that span. With Ryan Allen sidelined to open the season (we’ll get to him in a minute), Delaware might already be hampered by their reduced backcourt depth.

Delaware will also be without sophomore forward Chyree Walker, who the team announced will be transferring from the program. The announcement was made November 1, five days before the Blue Hens’ season opener.

Walker averaged 3.9 points and 2.4 rebounds in his freshman season. Among the team’s three freshman recruits last season, he entered the program with the highest expectations as Delaware’s highest-rated prospect since Devon Saddler.

Walker didn’t give Delaware much in 2017-2018 but had the potential based on his body type to be an athletic, switching, defensive-first forward.

Major Returners: Allen and Kevin Anderson return to form one of the CAAs most athletic backcourts, but each comes with question marks. Allen will be out until mid-December due to a foot injury he had surgery on in mid-October. It was his second surgery since the end of his freshman year, having undergone an operation in the spring to repair a torn labrum in his left shoulder.

The silver lining is that Allen’s timetable for return puts him back in the lineup before CAA play begins. It’ll leave him roughly two and a half months to feel out his game before the CAA tournament begins. If there is ever a time to sit out with an injury, this is it.

Ryan Allen keeps Rookie of the Year in Delaware’s court

In his freshman year, Allen established himself as a shooter. He tied the record for the most threes in a season by a Blue Hen, with 86, and hit the fifth-most threes of all freshman nationally. The next step in improving his offensive game is being able to get to the rim off the dribble as defenders close out. The step after that is to begin to create for others. 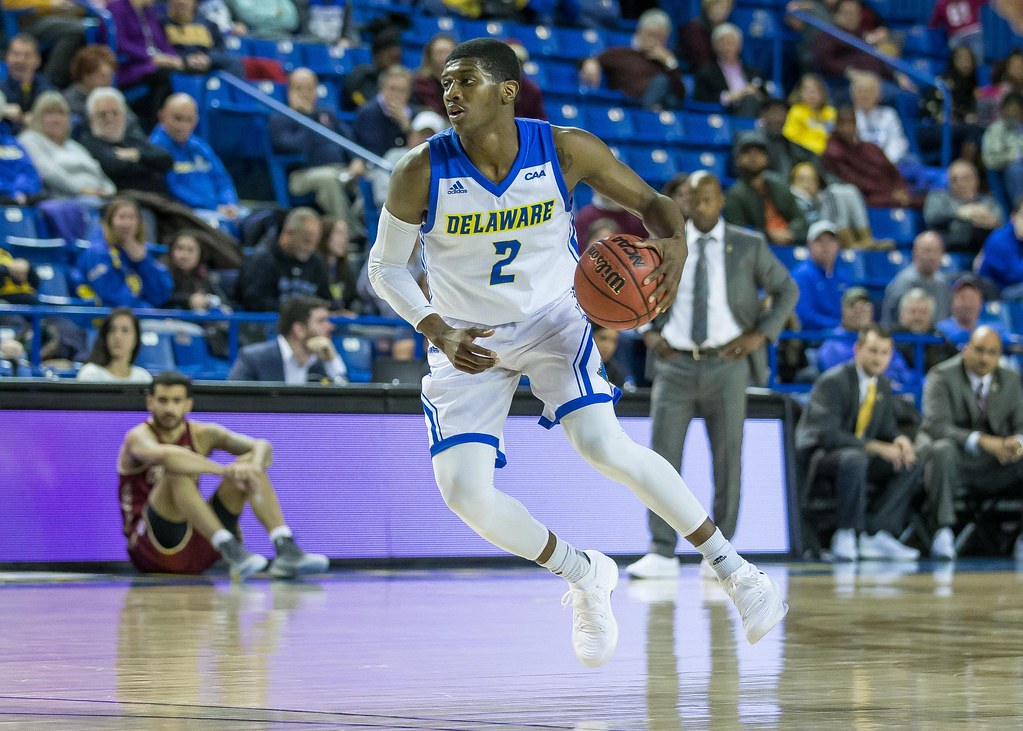 Courtesy of Delaware Athletics
Allen will miss the first two months of the season after having foot surgery.

Anderson is coming off a torn meniscus that cost him all of CAA play. He’ll be feeling his way back into the rotation and I’d expect him to be on a minutes limit early in the season.

“I think they both have a chance to be first-team all-league guys, player of the year candidates as they continue to progress through their college careers,” Ingelsby said of Allen and Anderson. “I feel like I have the best young backcourt in our league.”

Additions: Ithiel Horton was Delaware’s first recruit from the high school class of 2018. A 6’3’’ combo guard, Horton will be pressed into action right away, especially given the injury to Allen. Horton averaged 13.7 points in his senior season at Roselle Catholic High School in New Jersey.

Matt Veretto, a 6’7’’ forward from East Catholic High School in Manchester, Connecticut, will also have a chance at playing time. Veretto scored 19 points per game and averaged 11 rebounds. His high school team went 77-6 in his final three seasons.

“They can make shots,” Ingelsby said. “That’s an area where we were lacking, our ability to stretch the floor and open up the floor.”

Ryan Johnson, a 6’5’’ fifth-year transfer guard from Mercer, will also get an opportunity to contribute right away. Johnson played in 61 games in the last two seasons for Mercer, but never averaged more than 3.8 points per game.

Collin Goss will get his first chance at game action with the Blue Hens having sat out last season after transferring to Delaware from George Washington. Goss will likely fill the void left by Johnson as the backup to Carter. The 6’11’’ redshirt junior will have two years of eligibility with Delaware. He played in 31 games in his first two seasons at George Washington.

Preseason Ranking: Delaware is ranked seventh in the CAA preseason poll. It’s a fair ranking considering the program has not won more than one CAA tournament game since 2014. Delaware won’t be a bottom feeder, but they likely won’t be among the favorites heading into March.

Northeastern, led by point guard Vasa Pusica, is the top team in the poll followed by the reigning champion College of Charleston. Charleston loses Joe Chealey, one of the CAAs most dangerous shooters, but returns its top scorer Grant Riller and all-conference big man Jarrell Brantley. William and Mary, which returns three of the CAAs top 20 scorers, including center Nathan Knight, will also be in the mix.

X-Factor: Eric Carter. Last season, Ingelsby said Carter was ready to be one of the top big men in the CAA. He didn’t quite get to that point, but he developed into a dependable starter, raising his points per game average from 6.6 to 11.0 and his field goal percentage from 50.6 percent to 59.3 percent, while playing eight more minutes per game on average. 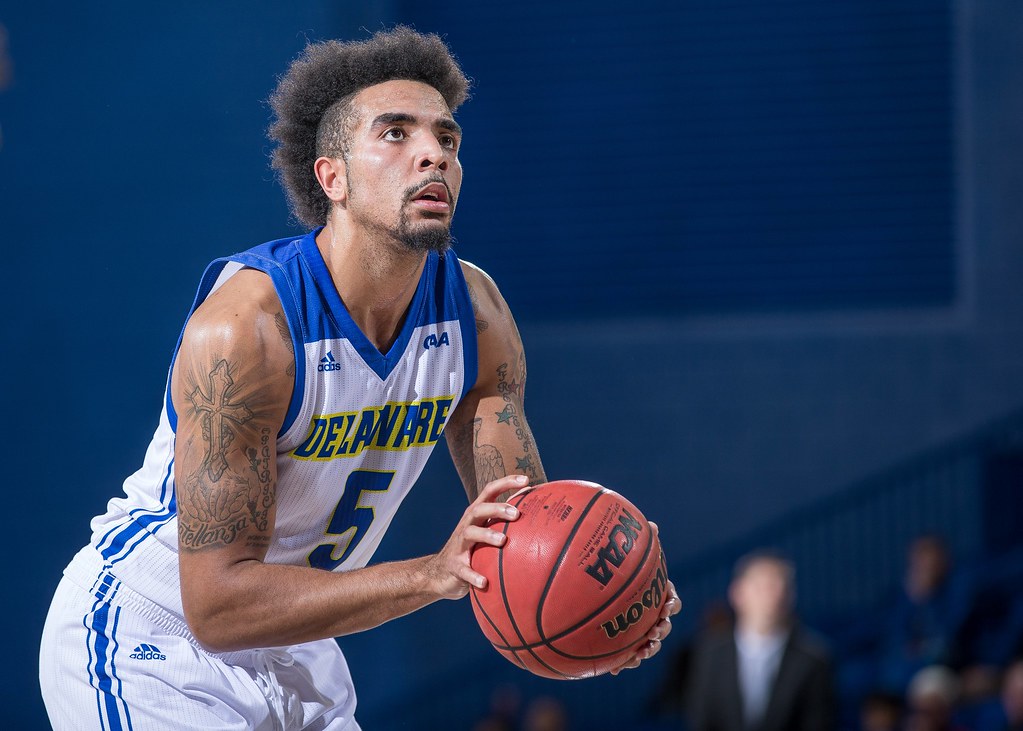 Carter still has the potential to make another leap and if he does so, it could vault Delaware into the fringe contender tier of the CAA. The preseason voters showed they agree by naming Carter All-CAA preseason Honorable Mention.

“I’m not sure there’s a better offensive big guy in our league,” Ingelsby said.

Future Outlook: Delaware has been in rebuild mode for several years but their best chance at a CAA Championship is still in the future, not the present. The 2018-2019 season, like previous ones, will serve as a developmental year.

Then, for 2019-2020, Delaware will be well equipped. They’ll get transfers Nate Darling, a sharpshooter from UAB, and Justyn Mutts, a forward from High Point, plus Allen and Anderson will be a year older and should form one of the CAAs most formidable back courts. The most critical part of this season will be their progression. 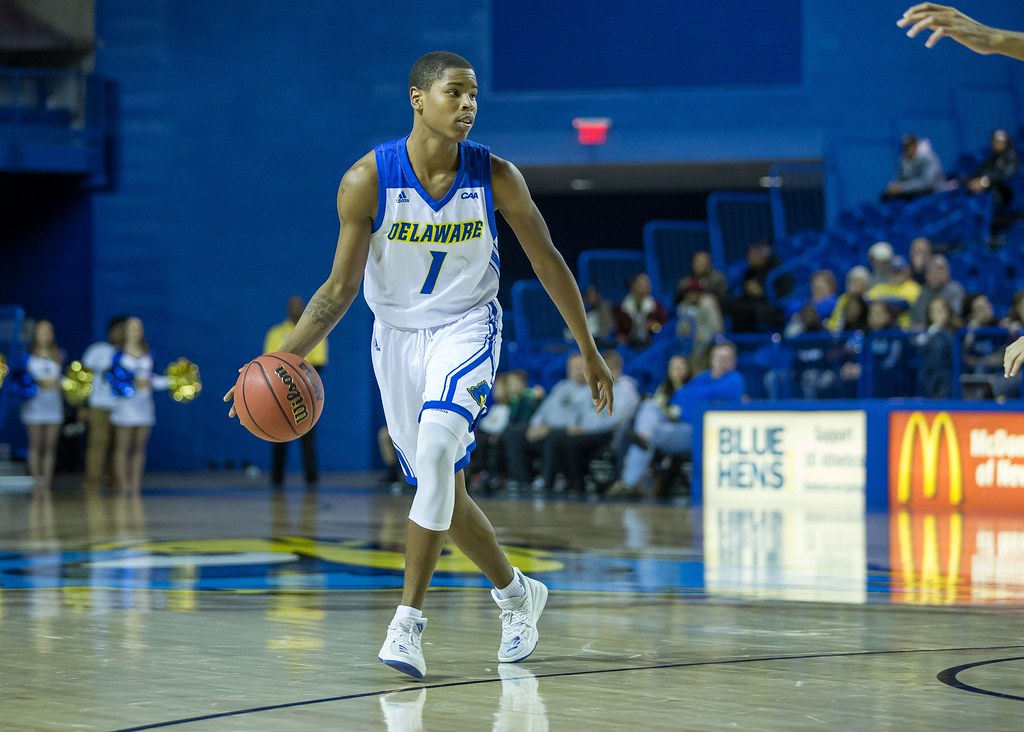 Courtesy of Delaware Athletics
Kevin Anderson will be relied upon heavily in his sophomore season, Brandon Holveck writes.

While Delaware will also want to develop its depth and see players like Cushing take a step, basketball is a star-driven game. If Allen and Anderson are both elite scorers and playmakers, come tournament time, Delaware can survive with a six or seven man rotation, and make a deep postseason push.